Hindi or English? The Politics of Language

Update Required To play the media you will need to either update your browser to a recent version or update your Flash plugin.
By VOA
11 July, 2014

Choosing an official national language can be difficult, at times even dangerous. This is especially true for countries that have many languages and a colonial past. Like India, for example.

In India, deciding whether to use English or Hindi includes issues of social standing, history, nationalism and even geography. It is a socio-political- geo-lingua debate. It is the Politics of Language.

The question of whether to use English or Hindi is filled with India's colonial history and class struggle. And India is again debating the issue. New government leadership is moving toward making Hindi the official language of government communications.

Neerja Chowdhury is an independent political analyst. She says Mr. Modi is the son of a poor tea seller. He has "come through the ranks," or worked his way up in life.

"But Mr. Modi, he is representing a different India. He has also come through the ranks, you know, ((and through)) his humble beginnings, and he has made his way up. So this is the language of comfort for him in so far as expression goes."

No one questions the prime minister's personal language choice. However, many criticize his plan to make English second to Hindi when it comes to the working language of government. 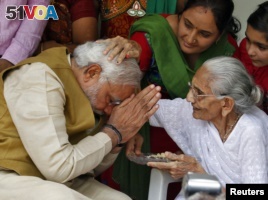 Sometimes, even world leaders have to get permission from the mothers. Here, Hindu nationalist Narendra Modi, India's new prime minister, seeks blessings from his mother.

Hindi is widely spoken in the north. The north is also the power center of the ruling Bharatiya Janata Party. The southern and eastern states in India have always chosen among local languages or English. About fifty years ago, efforts to make Hindi the country's only official language caused violent riots in the south. 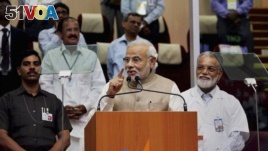 Perhaps wanting to avoid repeating that mistake, Prime Minister Modi showed that he has no problem with the English language. After watching the launch of a satellite in the southern Andhra Pradesh state, Mr. Modi surprised many by making his first speech in English since becoming prime minister.

"My congratulations to brilliant space scientists and the Department of Space for yet another successful launch of the Polar satellite."

Some political observers say that was an intelligent move to calm the south, where many of the scientists call home. But officials in New Delhi continue to be under pressure to use Hindi. And many are clearly unhappy about that.

India's upper middle class includes many senior, or top, government officials. They grew up mostly speaking English in their homes and in school.

They can speak Hindi. But their written communication skills are often poor. So, to keep in step with the Prime Minister, many are trying to quickly improve their Hindi.

But critics say it is English that connects this diverse country. Neerja Chowdhury says it is a question of progress in today's widening world.

"The world is moving on. Look at the way the Chinese are learning English. And why should we give up a natural advantage that we have had all these years?"

The debate will most likely continue as Prime Minister Modi and the BJP try to establish a Hindu nationalist party with a growing middle class. And these people may not know English as well as they know Hindi.

Do have any stories of language politics where you live? Do accents or dialects play a part in social status? Let us know in our comment section.