Update Required To play the media you will need to either update your browser to a recent version or update your Flash plugin.
By Alice Bryant
24 September 2020


Today, let me start with a question: What do the following three statements have in common?

You are learning about grammar.
The president's words were shocking.
I smelled food burning in the kitchen.

Did you find the commonality? You may have noted that there is an -ing word in each sentence: learning, exciting, burning. These are examples of the present participle, a word form that ends in -ing and has a specific purpose in a sentence. 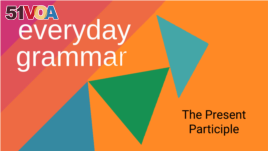 Present participles can refer to the present, past or future. I hope the meaning of that becomes clearer over the next few minutes.

On this Everyday Grammar program, we will talk about three uses for present participles.

As a reminder, a continuous tense is one that includes the verb "be" plus the -ing form of a verb. There are six continuous tenses in English. Some are more common than others. You do not need to learn them all to understand the present participle.

Continuous tenses can describe present, past or future actions or events.

Now, let's think about an example from earlier. Listen closely for the verb:

You are learning about grammar.

Here, the speaker used the present continuous verb tense. Notice that the verb "be" appears in the present form "are." And the verb "teach" is in present participle form, "teaching."

Now, listen to an example about something that already happened:

I was watching a movie when you called.

In the first part of the sentence, the speaker used the verb "was watching," which is the past continuous tense. Notice that the verb "be" appears in the past form, "was." Yet the verb "watch" still appears in present participle form, "watching."

Next, let's turn to verbs of perception, also known as "sense verbs."

These are verbs that describe experiences we have through the physical senses of sight, sound, touch, smell and taste.

We sometimes use the present participle after sense verbs.

Listen for the sense verb and the present participle in this sentence, which you heard earlier:

I smelled food burning in the kitchen.

Here, the sense verb is "smell" and the sentence is about something that happened in the past. The speaker used the verb "burn" in its present participle form, "burning."

Notice that the sentence structure is sense verb + object + present participle. The object in the speaker's sentence is "food."

Here is another example that involves a sense verb and the present participle:

I heard the woman talking about the election.

We usually use these adjectives to describe a person, thing or idea that causes a feeling or emotion.

In one of our earlier examples, you heard the adjective "shocking." Listen to it again and take mental note of what caused the emotion:

The president's words were shocking.

The speaker is saying that she felt shocked by something: the president's words.

Participial adjectives appear in the same position in sentences that normal adjectives do – after linking verbs, such as "be," and before nouns.

In this final example, listen for the -ing adjective and the noun that follows:

That boring online class put me to sleep!

Did you find the adjective? It was "boring." And it came before the noun "online classes."

Remember that -ing adjectives describe the cause for an emotion. In this case, the online class caused the speaker to feel bored.

And that's our program for this week.

refer to – v. to have a direct connection or relationship to something

tense – n. a form of a verb that is used to show when an action happened

perception – n. the way that you notice or understand something using one of your senses

emphasize – v. to give special attention to something