The Race for 'Ultra-Fast' Weapons Continues

Update Required To play the media you will need to either update your browser to a recent version or update your Flash plugin.
By Pete Musto
24 May 2020


They fly at speeds of over one-and-one-half kilometers a second, sometimes faster. They move in ways that make them extra difficult to find and destroy in flight.

United States President Donald Trump calls them "super-duper" missiles, although they are better known as hypersonic weapons. And they are at the heart of Trump administration worries about China and Russia.

For years, the U.S. has searched for ways to get ultra-fast flight right. But it has done so unevenly -- suspending research projects, and then starting them up again. Now, China and Russia are arguably closer to perfecting the necessary technology. And the Trump administration is setting aside billions of dollars a year for hypersonic offense and defense. 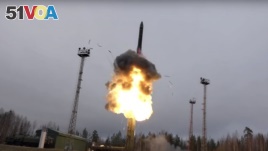 In this photo taken from undated footage distributed by Russian Defense Ministry Press Service, an intercontinental ballistic missile lifts off from a truck-mounted launcher somewhere in Russia.

The U.S. defense department is clear about its purpose. Mark Lewis is the department's director of defense research and engineering for modernization. In March, he told reporters: "Our ... goal is, simply, we want to dominate future battlefields."

Critics argue that hypersonic weapons would add little to the U.S. military's ability to prevent war. Some think such weapons could lead to a new, destabilizing arms race.

Two things make these weapons special: speed and maneuverability, the ability to make complex movements. Speed brings surprise, and maneuverability makes the weapons difficult to follow. Together, those qualities could mean trouble for missile defenses.

By generally agreed definition, a hypersonic weapon is one that flies at speeds higher than Mach 5, or five times the speed of sound. That is about 1,234 kilometers per hour. Most U.S. missiles, such as those launched from aircraft to hit other aircraft or ground targets, travel between Mach 1 and Mach 5.

Trump sometimes talks about his interest in hypersonic weapons, sometimes without using the correct term. In February he told state governors visiting the White House: "We have the super-fast missiles — tremendous number of the super-fast. We call them ‘super-fast,' where they're four, five, six and even seven times faster than an ordinary missile. We need that because, again, Russia has some."

And earlier this month, Trump told reporters, "We have no choice, we have to do it, with the adversaries we have out there," naming China and Russia.

The U.S. defense department is working on two main kinds of hypersonic weapons. One, called a hypersonic glide vehicle, is launched from a rocket. It then maneuvers to a target at high speed to avoid interception.

The other is sometimes called a hypersonic cruise missile. Launched from a fighter jet or bomber, it would be powered by a supersonic combustion ramjet, or scramjet. This helps the missile to fly and maneuver at lower altitudes.

On March 19, the military flight-tested a hypersonic glide vehicle at its Pacific Missile Range Facility in Kauai, Hawaii. Pentagon officials called the test a success.

As recently as 2017, the Pentagon was spending about $800 million on hypersonic weapon programs. That nearly doubled the following year, then rose to $2.4 billion a year later and hit $3.4 billion this year.

This project is highly important to the Pentagon. But it could become limited by the budgetary pressures that are expected as a result of federal spending on coronavirus related issues.

China is pushing for major developments in hypersonic weapons. It has carried out successful tests of the DF-17, a missile designed to launch hypersonic glide vehicles. A U.S. Congressional Research Service report shows that the DF-17 missile is designed to travel between 1,600 and 2,400 kilometers and could be deployed this year.

Critics see hypersonic weapons as unnecessarily dangerous and a continuation of the arms race between the U.S. and former Soviet Union. A 2017 report from the RAND Corporation research group warned about these technologies spreading to countries other than China, Russia, and the U.S.

The Associated Press reported this story. Pete Musto adapted the report for VOA Learning English. George Grow was the editor.

dominate – v. to have control of or power over someone or something

destabilizing – v. causing something, such as a government, to be unable to continue existing or working in the usual or desired way

interception – n. the act of stopping and taking someone or something that is going from one place to another place before that person or thing gets there

altitude(s) – n. the height of something, such as an airplane, above the level of the sea