The Real Prince Philip vs. Philip of The Crown

Update Required To play the media you will need to either update your browser to a recent version or update your Flash plugin.
By Dan Novak
13 April 2021


The Crown is a popular television drama about the British royal family.

One of the most important characters is Prince Philip, Queen Elizabeth's husband. Several shows shine a light on Prince Philip, also known as the Duke of Edinburgh. They examine his life and his feelings about being a consort of the royal family. A consort is the marriage partner of a member of a royal family. 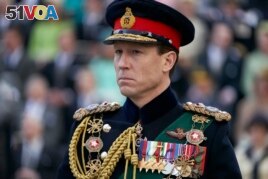 In this image released by Netflix, Tobias Menzies portrays Prince Philip in a scene from the third season of "The Crown." (Des Willie/Netflix via AP)

The Philip in the TV show is seen being a cold father to his son Prince Charles. The show also suggests Philip was unfaithful to his wife. But he is shown as a positive influence on Elizabeth, and a man who loves his country.

Peter Morgan is the creator of the Netflix show. He said the show is based on historical research and imagination. The truth of Philip's life in the royal family may never be fully known. But here are a few true things to compare to the show:

The Crown: Philip wants his children to take his last name, Mountbatten, and not the Queen's, Windsor. The answer is no.

When Elizabeth becomes Queen, Philip leaves the military. He and Elizabeth fight over his role in the royal family. He hates that he must kneel to his wife during the Queen's coronation.

Philip later accepts his role as consort, and the two find a balance in their family and marriage.

Real life: When Philip was not allowed to change the family name, he complained. In Gyles Bradreth's book, Philip and Elizabeth: Portrait of a Royal Marriage, he was angry that he could not give the children his family name.

"I am nothing but a bloody amoeba," he said.

Eight years later, it was decided that his children and grandchildren would use both names. For example, Prince Harry and Meghan Markle's son is named Archie Harrison Mountbatten-Windsor.

The Crown: In one episode, Philip is interested in the first moon landing. He watches the astronauts with great respect and thinks his life is boring by comparison. He meets the three American astronauts and tells them that his position and marriage kept him from the life he wanted.

Real Life: Philip lived a life of adventure. He fought in World War II, received medals and became a first lieutenant in the Royal Navy.

He learned to fly in the 1950s. He was a polo player, painter, art collector and skilled sailor. He drove until the age of 97, when he crashed his car.

The Crown: When Diana and Philip first meet at Balmoral Castle in Scotland, they become friends. After a day of hunting and talking, Philip supports her marriage to Charles.

The marriage begins to fail. Diana tells Philip she is thinking of leaving the royal family. She says the family does not care about her. Philip tells her everyone in the family is an outsider except the Queen.

Real Life: In letters between Diana and Philip, he was supportive of Diana. He was also critical of his son's involvement with now-wife Camilla.

Then Diana gave a very truthful TV interview that Philip did not like. He wrote that she must "fit in" or leave the family.

Lynn Elber reported this story for the Associated Press. Dan Novak adapted it for VOA Learning English. Susan Shand was the editor.

unfaithful- adj. - having a sexual relationship with someone who is not your wife, husband, or partner

kneel - v. to be in a position in which one or both of your knees are on the floor

coronation- n. a ceremony in which a crown is placed on the head of a new king or queen

amoeba- n. a tiny living thing that consists of a single cell

outsider- n. - a person who does not belong to or is not accepted as part of a particular group or organization