Update Required To play the media you will need to either update your browser to a recent version or update your Flash plugin.
By Alice Bryant
05 May, 2019


Gardening can be both personally satisfying and a good activity for the mind and body. Flowers beautify your surroundings, while fresh vegetables provide some of the tastiest foods on your table.

Plant scientist and gardening expert Lee Reich knows all about these things. He has written a number of books and "how to" guides. The Associated Press news agency publishes his stories on gardening and caring for plants of all sizes.

A seedling is a young plant grown from a seed. It can be easy to grow seedlings inside the home. But what happens when they get bigger?

Reich says seedlings that start indoors or in a greenhouse need to go through a period of transition before they can safely remain outdoors. This period is called "hardening off." It will prepare the seedlings for wind, stronger sunlight and up-and-down temperatures. 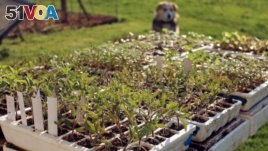 This undated photo shows seedlings in New Paltz, N.Y. Gradual exposure of seedlings to outdoor conditions readies them for eventual planting out in the garden.

Here is what Reich suggests for hardening off your seedlings:

First, make the transition from indoors to outdoors slowly, over a week or two. A good place to harden off seedlings is in a partly protected area outside the home, such as a coldframe. A coldframe is usually an open-bottomed box with a clear, removable cover.

You can also harden off seedlings near a wall in an area where there is a mix of sun and shade. Or keep the seedlings fully exposed to outdoor weather conditions – for short, but increasing periods.

The lower temperatures of the hardening-off period will lead to changes in the seedlings.

Seedlings of vegetables like cabbage and lettuce can develop the ability to survive freezing temperatures. Plants like snapdragons and pansies can also develop this ability. They gain strength against cold weather by building up sugars in their cells.

But seedlings of tomatoes, marigolds and other plants have trouble in temperatures below freezing. They can even suffer damage when temperatures fall below 10 degrees Celsius. Damage from cold prevents sunlight from producing photosynthesis – the process by which a green plant turns water and carbon dioxide into food.

As tomatoes and other sun-loving plants harden off through slow exposure to cooler air, they are better able to repair and prevent cold damage.

Next, there is sunlight. Sunlight can damage the leaves of seedlings that have grown indoors. Even without cold, outdoor sunlight can be as much as 10 times more intense than light from the inside of a sunny window.

Slow exposure to more intense light thickens cell walls as well as existing and new leaves. This exposure can begin in areas of partial shade, or with just a few hours each day of full sun. With increasing light exposure, leaves also turn darker green.

And stomata become more quickly able to open and close in changing conditions. Stomata are the very small openings in leaves through which water is lost, oxygen released, and carbon dioxide taken in.

Reich notes that stomata also play a role in a plant's slow adaptation to wind.

During the hardening-off period, plants become able to react more quickly to drying winds by closing their stomata. Even movement of the plant, whether from wind or something else, affects how reactive stomata are.

Movement of plants has yet another effect: It slows growth of their stems. This adds to the short, pretty green look that shows a plant has been well hardened off.

So, you can blow on, shake or softly touch your seedlings often to help them become strong, but short plants that are better able to survive in a garden. Spending a week or so outdoors in a sheltered area or for only part of the day will ease your seedlings' move to the garden. So they will almost not realize they have been moved – and that, Reich says, is how it should be.

Lee Reich wrote this article for the Associated Press. Alice Bryant adapted it for Learning English.

gardening – n. the activity of tending and cultivating an area of ground where plants, such as flowers or vegetables, are grown

greenhouse – n. a building or part of a building that has glass walls and a glass roof and that is used for growing plants

adaptation – n. a change in a plant or animal that makes it better able to live in a particular place or situation

stem – n. the main long and thin part of a plant that rises above the soil and supports the leaves and flowers