'The Romance of a Busy Broker' by O. Henry

Update Required To play the media you will need to either update your browser to a recent version or update your Flash plugin.
By VOA
02 April 2021


We present the short story "The Romance of a Busy Broker," by O. Henry. The story was originally adapted and recorded by the U.S. Department of State.

"Good morning, Pitcher," said Maxwell. He rushed to his table as if he were going to jump over it, then began to look at the many, many letters and other papers waiting there for him. 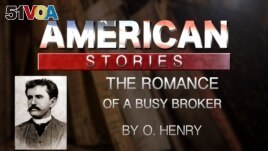 The Romance of a Busy Broker by O. Henry

The young lady had been Maxwell's secretary for a year. She was very beautiful, and very different from most other secretaries. Her hair always looked plain and simple. She did not wear chains or jewels. Her dress was gray and plain, but it fitted her very well. On her small black- hat was the gold-green wing of a bird.

On this morning she seemed to shine softly. Her eyes were dreaming but bright. Her face was warmly colored, and her expression was happy.

Pitcher watched her. There was a question about her in his mind. She was different this morning. Instead of going straight to the room where she worked, she waited. She seemed not to know what to do. Once she went over to Maxwell's table, near enough for him to see that she was there.

The machine sitting at that table was no longer a man. It was a busy New York broker.

"What is it? Anything?" asked Maxwell shortly. Papers lay like snow covering his table. His gray eyes looked at her as if she were another machine.

"Nothing," answered the secretary, moving away with a little smile.

"Mr. Pitcher," she said, "did Mr. Maxwell talk to you yesterday about getting another secretary?"

"He did," Pitcher answered. "He told me to get another one. Several are coming to talk to us this morning. But it's now after nine and not one has appeared."

"I will do the work as usual," said the young lady, "until someone comes to fill the place." And she went to her table. She took off the black hat with the gold-green bird wing and put it away as usual.

If you have never seen a busy New York broker on a busy day, you know little about men at work. Every minute of a broker's hour is crowded.

And this day was Harvey Maxwell's busy day.

Beside his table stood a machine. From this came a long, narrow, endless piece of paper, bringing him business news as soon as it happened.

Men began to come into the office and speak to him. Some were happy, some were not, some were in a hurry, some were full of anger.

Boys ran in and out with letters for him to read and answer at once.

Pitcher's face now showed that he was alive. The other men who worked in the office jumped around like sailors during a storm.

And there were storms in the business world, fearful storms. Every storm was felt in the broker's office.

Maxwell moved his chair against the wall. Now he was like a dancer. He jumped from the machine to his table to the door and back again.

In the middle of all this, he slowly realized that something had come near him. There was golden hair; there was a very large amount of it, high on a head. On top of the hair was a big hat covered with birds' wings. There was a long silver chain, hanging from a neck until it nearly touched the floor. And among all these things there was a young lady.

Pitcher was beside her to explain.

"Lady for that job as secretary," said Pitcher.

Maxwell turned half around, with his hands full of letters and paper from the machine.

"Job of secretary," Pitcher said again. "You told me yesterday to have someone sent here this morning."

"You are losing your mind, Pitcher," said Maxwell. "Why should I tell you anything like that? Miss Leslie is a perfect secretary. She can keep the job as long as she wants it." To the young lady he said, "There is no job here." And to Pitcher he added this order: "Tell them not to send any more. And don't bring any more in here to see me."

The silver chain left the office, hitting against chairs and tables with anger, as it went. Pitcher said to another man in the office that Maxwell was more forgetful every day.

The rush of business grew wilder and faster. Maxwell was working like some fine, strong machine. He was working as fast as he could. He never had to stop to think. He was never wrong. He was always ready to decide and to act. He worked as a clock works. This was the world of business. It was not a human world, or the world of nature.

When the dinner hour was near, things grew quieter.

Maxwell stood by his table with his hands full of papers and his hair hanging over his face. His window was open, for it was the time of year when the weather was beginning to turn warm.

And through the window came a soft sweet smell of flowers. For a moment the broker was held there, without moving. For this smell of flowers belonged to Miss Leslie. It was hers and hers only.

The smell seemed almost to make her stand there before him. The world of business grew smaller and smaller. And she was in the next room—twenty steps away.

He rushed into the other room. He stopped beside the secretary.

She looked up at him with a smile. Warm color came into her face, and her eyes were soft and kind.

Maxwell's hands were still full of papers. "Miss Leslie," he began quickly, "I have only a moment. I want to say something in that moment. Will you be my wife? I haven't had time to make love to you in the usual way. But I really do love you. Talk quick, please. I have to get back to my work."

"Oh, what are you talking about?" cried the young lady. She rose to her feet and looked at him, round-eyed.

"Don't you understand?" said Maxwell. "I want you to marry me. I love you, Miss Leslie. I wanted to tell you. So I took this moment when I wasn't too busy. But they're calling me now. Tell them to wait a minute, Pitcher. Won't you, Miss Leslie?"

The secretary acted very strangely. At first she seemed lost in surprise. Then tears began to run from her wondering eyes. And then she smiled through her tears, and one of her arms went around the broker's neck.

"I know now," she said, softly. "It's this business. It has put everything else out of your head. I was afraid at first. Don't you remember, Harvey? We were married last evening at eight, in the Little Church around the Corner."

Now it's your turn to use the words in this story. How do you organize your time? Is work the most important thing to spend your time on? Let us know in the comments section or on 51VOA.COM.

broker – n. a person who helps other people to reach agreements, to make deals, or to buy and sell property such as stocks or houses

secretary - n. a person whose job is to handle records or letters for another person in an office

rush(ed) – v. to move or do something very quickly or in a way that shows you are in a hurry

chain(s) – n. a series of usually metal links or rings that are connected to each other in a line and used for supporting heavy things, for holding things together or for decoration

rush – n. a situation in which a large number of people move to or toward one place at the same time usually to do a specific thing or to search for something