The Story of the First Black US Congressman

Update Required To play the media you will need to either update your browser to a recent version or update your Flash plugin.
By Susan Shand
26 February 2021


Former slave Joseph Hayne Rainey entered the Capitol building as the first African American member of the U.S House of Representatives in December 1870.

His great-granddaughter can only wonder what that was like for him. "He was the only one, the only Black man," Lorna Rainey told VOA.

She was just three years old when family members began sharing stories about Joseph Rainey's place in history. "You know, there was something inside of him that said, ‘I'm not going to quit, and once I get to Washington, just watch what I'm going to do,'" she said.

In February, America celebrates Black History Month. It is a time to examine the lives of African Americans like Joseph Rainey. His service to his country is now receiving more attention.

Bobby Donaldson said: "Joseph Rainey is someone who can be described as the founding father of our nation." Donaldson is a history professor at the University of South Carolina. "He...helped to envision a nation following emancipation during this...era called Reconstruction," Donaldson told VOA. 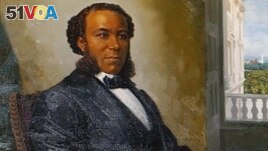 The Reconstruction Era is the ten year period after the American Civil War. The United States struggled to reunite the North and the South and to establish the legal rights of African Americans during that time.

Joseph Rainey began his political career in 1866, after returning to the United States from Bermuda. He had fled to Bermuda during the Civil War.

He was a member of the Republican Party, the party of Abraham Lincoln. He was elected to the South Carolina state legislature and helped write a new state constitution that defended the equality of citizens.

"One of the things that was a direct result of the 1868 constitution was the notion of free public education for all citizens. Joseph Rainey helped to shape that," Donaldson said.

He supported civil rights, education and economic development. He served nine years in Congress and influenced the political careers of some 15 African Americans who served in Congress during the Reconstruction Era.

Rainey was an early supporter of two important civil rights protections to the United States Constitution, the 14th and 15th Amendments. They guarantee full citizenship and the right to vote to former slaves.

Rainey's political career ended after he was not reelected in 1878. Reconstruction was ending, and the Southern States began to pass laws that enforced racial separation and took away the political gains of African Americans.

"His Black supporters were prevented from voting for him," Donaldson told VOA. During that time, many Black voters were threatened with violence.

In his final speech to lawmakers in 1879, Rainey warned of trouble. "African Americans across the South lost their positions, lost their land and lost their power to vote," Donaldson said.

Last year, the U.S. House of Representatives named a Capitol building room after Rainey and placed his portrait in the halls of Congress.

"Now, he's getting the type of attention he rightly deserves," said Donaldson.

"He laid the foundation for generations of Black lawmakers to serve in Congress," said South Carolina Congressman James Clyburn. He is the current House majority whip, or number two in the leadership, and the most powerful African American in the House of Representatives.

emancipation – n. the state of being freed from the control of someone or something else

founding – n. the time when something important is created or established

envision –v. to think of something that might happen in the future

portrait – n. a painting or picture of a person

deserve –v. used to say that someone should or should not be given something

foundation – n. a base or starting point How a Formerly Enslaved Man