The University of Maine Shows How to Increase Its Student Population

Update Required To play the media you will need to either update your browser to a recent version or update your Flash plugin.
By Dan Friedell
17 September 2022


The number of students going to college in the U.S. has dropped by over one million since the spring of 2020. At that time, COVID-19 restrictions began going into effect everywhere in the U.S.

In addition, a number of U.S. states are finding they have fewer college-age young people than in the past. Maine, a state in the northeastern U.S., next to Canada, is one of those states.

A decreasing number of young people and the effects of COVID-19 measures make it difficult for large state universities to keep up their student numbers. 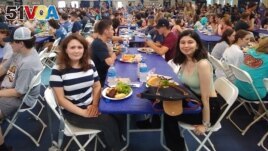 International students at the dinner with the university president during orientation at the University of Maine.

But, while universities in some states are having trouble bringing in new students, the University of Maine, in the city of Orono, is not.

This is the case although Maine is far away from most other states and has 10 percent fewer state high school graduates than 10 years ago.

During a time when fewer Americans are going to college, the University of Maine has been able to increase its number of undergraduate students by five percent. Why?

A recent story in the publication Hechinger Report said the University of Maine is ahead of other states in recruiting and retention measures.

The state is reducing the university's cost of attendance for students who come from other states and Canada. Because of scholarships and other financial aid, many students can go to Maine for the same price as a large university in their own state.

The university has about 12,000 students. While that seems like a lot, it is not nearly as many as big schools like Ohio State University, which has about 60,000. As a result, the school is trying to make a strong connection with both current and prospective students.

University leaders say they are trying to get to know all students who visit — even those who decide to go elsewhere.

Chris Richards is vice president of enrollment management. He said the school needs help from everyone to recruit the next class of students, not just the people who work in the admissions office. That was the old way.

One part of the new way is for university professors and researchers to make presentations about their work at nearby high schools. Another is to make visitors feel welcome.

Richards described helping someone who seemed new to the school grounds find their way. "People want that," Richards said.

Em Jeffrey is a new student from the nearby state of New Hampshire. She said she noticed the difference between visiting Maine and visiting other schools.

"I definitely felt more welcomed. None of it felt forced," she said.

"I do think there are lessons to be learned from what's going on in Maine right now," he said.

Richards said his university recognized the problem about 10 years ago when the number of high school students in Maine started to fall. At one point, 80 percent of the university's students came from Maine. Now about 40 percent come from other states.

Orlina Boteva is the director of international programs. She grew up in Bulgaria and came to study at the University of Maine. She completed postgraduate degrees there and has been working with international students since 2009.

She said international students who are interested in the University of Maine will have to pay a similar cost compared to students coming from other states in the U.S. But the university does offer scholarships from $5,000 up to $20,000. In addition, the university offers teaching assistant positions for graduate students.

Boteva said her department does not do anything different from other schools in the northeastern U.S. to bring in international students.

However, she said the university's goal of connecting with students extends to those from outside of the U.S. University officials travel to other countries to find students and meet their families. They even made some visits last year when other universities were not sending their representatives abroad. The university also tries to make sure international students feel cared for when they come to Maine.

As a former international student herself, Boteva said, she "deeply cares" about the experience students from other countries have while in Maine. She also wants students to know that it is possible to find out how to get a work visa and stay in the U.S. after finishing a study program.

She said the school is thinking about how it can help students find a pathway to education if their countries become destabilized. This year, there are eight students from Ukraine attending the University of Maine.

"The good thing for us," he said, "is that our leadership hasn't existed in a vacuum of false reality."

recruit –v. to find people qualified to join a group or organization

retention –n. the act of keeping someone in a job or at a school

scholarship –n. an amount of money that is given by a school, organization or individual to a student to pay for the student's studies

prospective –adj. possibly becoming something in the future

enrollment –n. the act of becoming a member or participant in something

mission –n. a task or job given to someone

destabilized –adj. to be affected in such a way that carrying on normally cannot be continued

exist in a vacuum –idiom to exist in a state unaffected by other influences; completely set apart and independent