Update Required To play the media you will need to either update your browser to a recent version or update your Flash plugin.
By Susan Shand
21 March 2020


Eva Chura lives in an old gold mining town high in the Andes Mountains of Peru. She works with women known locally as "pallaqueras" or gold-pickers. She searches through the rocks of the Andes looking for small pieces of gold.

Twelve years ago, Chura moved to the village of La Rinconada from her hometown of Chupa. La Rinconada is believed to be the highest settlement in the world. It is home to about 50,000 people. 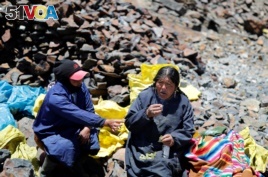 Eva Chura and another woman, who are both 'pallaqueras' known as gold pickers, smoke and drink anise while chewing coca leaves, as part of a ritual for searching for gold performed before a shift, in La Rinconada, the Andes, Peru, October 11, 2019.

Five of Chura's eight children live with her in a metal structure. She walks for an hour to reach the place where local women work. When they arrive, they sit down and chew coca leaves, smoke cigarettes and drink a little alcohol for luck.

"I don't count my husband, because he is no help as a father or a husband," she said. "I'm the papa and the mama. ... We don't want for anything. We have everything."

To remove gold from the rocks the men and women use mercury, a toxin that they wash away with water from a nearby glacier. The water flows down the mountain into rivers.

"The water used in mining is just dumped and all the communities downstream...receive polluted water" to support their farms, said Federico Chavarry. He is a lawyer and has worked on cases involving environmental crimes.

The pollution goes directly in Lake Titicaca, he said.

Titicaca is the largest lake in South America. It provides the drinking water and fish for the area's population. It is so badly polluted that the Global Nature Fund, a German environmental group, named it the most threatened lake in the world in 2012.

In the past, the pieces of gold found by the women made their way to jewelers and telephone manufacturers. In 2018, a Swiss company that had been taking the metal for years stopped after Peruvian government lawyers claimed the company was connected to organized crime.

Now, Chura and the others in La Rinconada say the gold supply is running out. "It's not like it used to be. That's why so many ugly things happen," she said.

"Sometimes there's gold, other times no. At the moment it's very low," Chura said.

The men of La Rinconada bar all women from the mines dug under the rock. The men believe the mine has a female spirit which becomes angry if the women try to take her gold. So, the pallaqueras climb onto black scree the men have dropped on the ground and search through it. They hope to find gold the men have missed.

The women take any gold they find to the black market gold dealers whose stores line La Rinconada's main street.

"In a week sometimes I can get 1 gram or 2 grams of gold," Chura said. Black market prices often change, but that can mean anywhere from $50 to $100.

"If I'm lucky it can sometimes be 20 grams, but that's down to luck," she added.

Thousands of women search for small amounts of gold. Some people say there are more than 15,000 pallaqueras in Peru.

No one collects garbage in La Rinconada. Women and men alike risk their lives and live in dirty conditions in the mountain's thin, cold air.

As the gold runs out and officials try to stop the pollution, her way of life is ending.

chew – v. to use your teeth to cut food into small pieces before you swallow it

scree – n. an area of loose stones on the side of a mountain

toxin – n. a poisonous substance and especially one that is produced by a living thing

glacier – n. a very large area of ice that moves slowly down a slope