2016 Most Dangerous Year Ever for Afghan Journalists

Update Required To play the media you will need to either update your browser to a recent version or update your Flash plugin.
By Jim Dresbach
14 July, 2016


The year 2016 has been the most violent year ever for reporters in Afghanistan, a new report says.

The Afghan Journalists Safety Committee released its latest report Monday. The group observes the safety situation of reporters in the country.

Ten members of the media have been killed this year. That is the most in the country's history.

The group reports a total of 54 incidents of violence against journalists since January 2016. That is a 38 percent increase compared to the first half of last year. 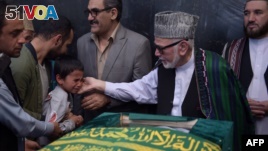 Ten year-old Mustafa, son of Afghan reporter Zabihullah Tamanna,(2L), relatives and friends pray around the coffin during a ceremony at a military hospital in Kabul on June 7, 2016.

The report also says the government was involved with 21 of the violent incidents. It did not, however, provide details about the people involved.

The report also notes the number of Taliban-linked cases has increased. The Taliban reportedly was responsible for 16 cases of violence against journalists.

The safety committee's latest report also says that the number of women working in media in Afghanistan has decreased since 2014.

However, the report calls Afghanistan's mostly free media and freedom of expression "the greatest achievements of the past 15 years."

This was the seventh report produced by the Afghan Journalists Safety Committee.

Joshua Fatzick wrote this story for VOA News. Jim Dresbach adapted it for Learning English. Ashley Thompson and Caty Weaver were the editors.