The Year in Migration So Far

Update Required To play the media you will need to either update your browser to a recent version or update your Flash plugin.
By Ashley Thompson
25 September 2021


People face cold, hunger and danger when they flee their countries. They risk their lives to escape conditions such as poverty and war.

About 4.2 million people around the world were reported as stateless, or not belonging to any country, at the end of 2020. But the United Nations refugee agency estimates that the true number is much higher.

Here is a look at some of the struggles people leaving their homelands have faced in 2021 so far. 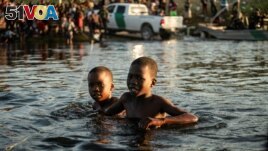 FILE PHOTO: Children seeking asylum in the U.S. grab onto a rope to guide them through the current while crossing the Rio Grande river into Mexico near the International Bridge between Mexico and the U.S. in Ciudad Acuna, Mexico, September 20, 2021. ( REUTERS/Go Nakamura/File)

In January, people in Bosnia took shelter in abandoned buildings near the town of Bihac. Some were fleeing conflict in Afghanistan. They tried to stay warm as they lined up to reach European Union-member Croatia across the border.

In February, police in Spain's North African territory of Melilla rescued people hiding in waste containers as they tried to make their way to the mainland of Spain.

And, the German ship named Sea-Watch rescued more than 360 people from small boats off the Libyan coast. The central Mediterranean migration path, south of the Sahara Desert, to Italy is considered one of the world's deadliest.

In March, worsening security and economic conditions in Mexico, Guatemala, Honduras and El Salvador led to the biggest rise in the number of migrants at the United States' southwestern border in 20 years. The U.S. Customs and Border Protection officials dealt with 173,281 people from the southwestern border in March. The administration of President Joe Biden also attempted to deal with large numbers of children trying to cross the border alone.

In May, Spain deployed troops to the Spanish territory of Ceuta in northern Africa. The troops guarded the country's border with Morocco after around 8,000 people crossed by swimming in or climbing over a barrier.

Around two-thirds of the people who made it to Ceuta, including children who arrived alone, were expelled by Spanish officials. But many said they would try again to reach Europe.

In June, thousands of Belarusians fled to Poland after a political crackdown by President Alexander Lukashenko. Nearly 10,000 Belarusians registered for humanitarian visas or asylum in the past year.

Lukashenko, who has held power since 1994, won another election in 2020. Months of protests followed. Tens of thousands of people have been arrested for expressing their opposition to Lukashenko.

In July, Afghans who walked through Iran for weeks arrived at the Turkish border to face a three-meter-high wall and other barriers. Turkish officials strengthened their efforts to block refugees from entering the country. Turkey detained 1,500 people near the Iranian border in a week, as violence rose in Afghanistan.

In August, Greece completed a 40-kilometer fence, guarded by soldiers, on its border with Turkey. The barrier was built to stop asylum seekers from trying to reach Europe after the Taliban's takeover of Afghanistan.

And, this month, more than 12,000 Haitians and others crossed the Rio Grande River from Mexico where they were living in a camp under a bridge in southern Texas. They were joined by people from Cuba, Venezuela and Nicaragua. Hundreds more continued to come to the border, leading to a humanitarian and political crisis for President Biden.

U.S. officials began flying the Haitians in Texas, who entered the country without permission, back to their homeland. The operation may be the start of the county's largest expulsion of migrants or refugees in many years.

migrant –n. a person who goes from one place to another especially to find work

crackdown –n. a serious attempt to punish people for doing something that is not permitted; an increased effort to enforce a law or rule