Theresa May to Be Britain's Second Woman Prime Minister

Update Required To play the media you will need to either update your browser to a recent version or update your Flash plugin.
By Bryan Lynn
11 July, 2016


Britain's Theresa May is set to become the second woman to hold the position of Prime Minister since Margaret Thatcher.

British Prime Minister David Cameron announced on Monday that he will resign Wednesday and Andrea Leadsom, May's rival for the position, abruptly withdrew.

Cameron told reporters he would officially offer his resignation to Britain's Queen Elizabeth on Wednesday.

The prime minister announced his intention to resign last month after Britons voted in a referendum to leave the European Union. Cameron had campaigned for Britain remaining in the EU.

Theresa May, 59, has served as Home Secretary in Cameron's cabinet since 2010. May had been campaigning in a race to lead the Conservative Party against Energy Minister Andrea Leadsom.

But Leadsom withdrew after she made comments highly criticized by the media and her party. In the comments, Leadsom suggested she was better qualified to be Prime Minister because she is a mother. May has no children. 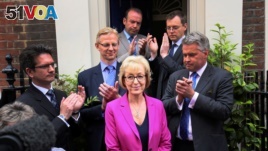 Andrea Leadsom, a candidate to become the next Conservative Party leader and British prime minister, rules herself out of the leadership battle during a news conference in central London, Britain July 11, 2016.

Speaking outside his residence at 10 Downing Street, Cameron said he was "delighted we are not going to have a prolonged leadership contest." He praised May for being "strong, competent and more than capable of taking on the role of prime minister."

During last month's referendum, also referred to as "Brexit," May campaigned for Britain to stay in the EU. Since the vote, she has pledged to help pull the country out of the bloc.

Speaking outside parliament, May said she was "honored and humbled" to be chosen the party's new leader.

She said she is prepared to provide "strong, proven leadership to steer us through what will be difficult and uncertain economic and political times." She added that Britain needs "to forge a new role for ourselves in the world."

May will be in charge of overseeing the country's complex transition out of the EU. She said her goal is to "negotiate the best deal for Britain in leaving the EU."

"Brexit means Brexit, and we're going to make a success of it," she said.

Bryan Lynn wrote this story for Learning English based on reporting from VOAnews.com, with additional reports from the Associated Press and Reuters. Hai Do was the editor.

We want to hear your thoughts on the Brexit vote. Write to us in the Comments section, and visit 51VOA.COM.

referendum – n. a vote of a single political question

competent – adj. having the necessary ability or skills to do something well

forge – v. to create or form