'They' Wins as Linguists’ Word of the Year

Update Required To play the media you will need to either update your browser to a recent version or update your Flash plugin.
By Jill Robbins
10 January, 2016

The pronoun "they" won out as Word of the Year, voted by the esteemed members of the American Dialect Society (ADS) on Friday. 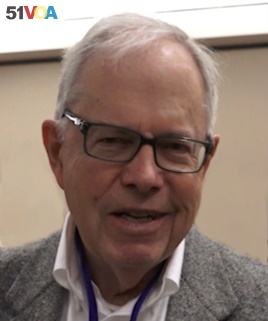 It is a pesky pronoun: It has been used as a singular pronoun in spoken English for years. In writing, however, it has mostly been used as the third-person plural.

Although some linguists say "they" has been used in both of these ways for many years, the media has been forced to use "they" more often when reporting about people who identify as transgender.

"Singular they [had] the best chance of winning," says linguist Ben Zimmer, who writes a column in the Wall Street Journal. "There's been a lot of discussion this year about something that has actually existed in the language for centuries."

English does not have a standard third-person pronoun that is gender-neutral, Zimmer explained. But very often "they" is used to describe a generic person like "everyone" or "anyone."

More and more, "they" is being used beyond the traditional gender binary of the "he" and "she" pronouns, he said. For example, "they" is used for people who identify as transgender, gender-fluid or gender-queer.

American Dialect Society president Alan Metcalf said people have argued about the use of "they" for more than 100 years.

"I think there is often a false sense that this is the turning point, that from now on this particular usage will be accepted and won't be argued about," Metcalf said.

"But you look at 100 years ago and you will find the same sorts of arguments. ... I think that 100 years from now they will still be a bit of a discussion point."

Competing with "they" in the "most useful" category were:

"There is no scientific criteria. It's just from all the words used during the past year. Sometimes it's a phrase or an abbreviation, but which one really seems to express the concerns and attitudes of the year gone by?" said Alan Metcalf, president of ADS.

Metcalf explains that the group had the idea for the Name of the Year back in 1990.

"Every year, Time magazine does a 'Person of the Year,' and we're the experts on words, so why don't we come up with a 'Word of the Year?' And we gradually developed the procedures for doing it, so those who vote on it would take some time to think about it." 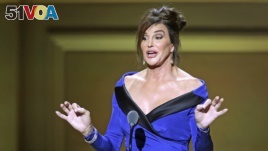 Former Olympian Caitlyn Jenner speaks on stage at the Glamour Women of the Year Awards where she receives an award, in New York, Nov. 9, 2015.

The society voted at its annual conference in Washington, D.C. Another group, the American Name Society, chose the important names of the year. You will probably not be surprised to learn that the name of the year was "Caitlyn Jenner."

Now it's your turn. What new word became popular in your country in 2015? What do you think of the choice for the English Word of the Year? Write to us in the Comments section or on our 51VOA.COM.

See the winners in all categories on the ADS website.

esteem – v. to think very highly or favorably of (someone or something) —usually used as (be) esteemed

transgender – adj. of or relating to people who have a sexual identity that is not clearly male or clearly female

binary – adj. relating to or consisting of two things or parts

gender fluid - a gender which varies over time (A person who is gender fluid may always feel like a mix of the two traditional genders, but may feel more boy some days, and more girl other days.)

gender queer – adj. used to describe a person who feels that his/her gender identity does not fit into the socially constructed "norms" associated with his/her biological sex

euphemism - n. a mild or pleasant word or phrase that is used instead of one that is unpleasant or offensive