Things Are Serious If You 'Cross the Rubicon'

Update Required To play the media you will need to either update your browser to a recent version or update your Flash plugin.
By Anna Matteo
14 January 2023

On this program we explore words and expressions in the English language. We give examples and notes on usage. Sometimes we tell about their origin story – where they come from. But origins are often a lot of guesswork. We often don't know how some expressions began.

That is not the case with today's expression – to cross the Rubicon. 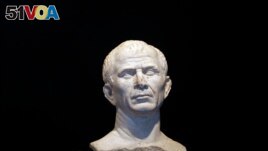 FILE - A life-size bust of Julius Caesar is seen at new buildings of the Department of the underwater and submarine archaeological (DRASSM) in Marseille, January 22, 2009. (REUTERS/Jean-Paul Pelissier)

To cross the Rubicon means to make a decision of permanence. It cannot be changed. It is irreversible - a done deal – no cancellations!

Someone who has crossed the Rubicon has reached a point where they cannot change a course of action. In other words, there is no going back.

Now for its origin.

This expression comes from a story about Julius Caesar. Rubicon is the name of the river he crossed with his army. Experts say this started a civil war in Rome in 49 BCE.

When our enemies draw a line in the sand and we pass over that line, we could also say we have crossed the Rubicon.

Therefore, the result or consequence of the decision or action is severe. It has weight. If I cross the Rubicon, I have made a fateful and final decision.

Therefore, we don't use this expression for low-stakes situations – times when nothing is at stake. If nothing is at stake, nothing important is at risk. For those lighter times, we can say, that ship has sailed or that train has left the station.

So, save cross the Rubicon for a heavy, meaningful decision or action.

A: Did you about Angela and Dimitry? They broke up.

B: What?? They seemed like such a great couple. What happened?

A: Well, Angela accepted a dream job out in Alaska. She's going to be researching polar bears.

B: That sounds great!

A: It is great. For her. The problem is ... she didn't tell Dimitry. He found out from some guy who works at their favorite coffee shop.

A: Yeah. Dimitry said he can forgive a lot but not this. She crossed the Rubicon when she decided to move without telling him first.

B: I like Angela. But Dimitry has a point.

origin – n. a rising, beginning, or coming from a source

irreversible – adj. not capable of going back or backward

consequence – n. something produced by a cause or necessarily following from a set of conditions

stakes – n. something that is at risk for gain or loss