Update Required To play the media you will need to either update your browser to a recent version or update your Flash plugin.
By VOA
20 November, 2015


Officials said a third body was discovered amid the wreckage at an apartment that French police raided Wednesday. 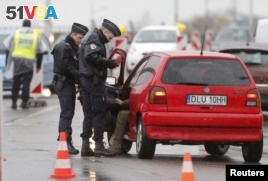 French police conduct a control at the French-German border in Strasbourg, France, to check vehicles and verify the identity of travelers as security increases after last Friday's deadly attacks in Paris, Nov. 20, 2015.

The newly discovered third body is believed to be a male, French media is reporting, Friday night. Police said they had not identified the body yet.

The raid took place in Saint-Denis, a northern Paris suburb. It lasted seven hours, and more than 5,000 rounds, or gunshots, were fired.

Initial news reports said Aitboulahcen detonated a suicide belt or vest she was wearing. But Friday, the French TV Station iTele said it was an unidentified man, not a woman, who blew himself up during the shootout with police.

Also on Friday, Prime Minister Manuel Valls announced that one more person had died from last Friday's attacks in Paris.

That brings the death toll from the attacks to 130.

In addition, the European Union announced Friday it will tighten passport controls for its 22 members. Included in the tighter controls are the non-EU nations of Norway, Switzerland, Iceland and Liechtenstein.

Europe's passport-free zones were criticized after the Nov. 13 attacks. Some law enforcement officials said passport control needed to be tightened.

French officials believed that Abdelhamid Abaaoud, a citizen of Belgium, was in Syria with fellow Islamic State militants on November 13. They said they were unaware Abaaoud had returned to Paris before Friday's terrorist attacks.

We want to hear from you. Write to us in the Comments section or share your views on our 51VOA.COM.

alleged – adj. accused of having done something wrong or illegal but not yet proven guilty

ignite – v. to set off an explosion

unidentified – adj. not known or identified