This Is 'The Best Thing Since Sliced Bread'!

Update Required To play the media you will need to either update your browser to a recent version or update your Flash plugin.
By Anna Matteo
17 September 2022

On this program we explore words and expressions in the English language. We give definitions, notes on usage, and examples.

Today we talk about innovation. Innovation is an improved way of doing something. Innovation can lead to change that makes for a better product or idea. Sometimes innovation involves a new, physical invention. 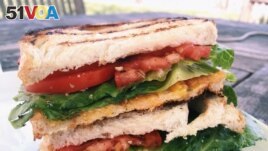 Pictured here is a grilled cheese sandwich with lettuce and tomato. For a sandwich, you need slices of bread that are the same size. (File Photo)

Some innovations are revolutionary.

Innovation brings us to the world of bread and today's expression: "the best thing since sliced bread."

But where does this expression come from?

Well, for many years, bread has been a main part of meals for many people around the world. Most bread comes in a long form, called a loaf. A bread loaf travels well. You can buy a loaf of bread, stick in your bag, and make it home without the bread getting damaged. And on the way, you can break off a piece of bread for a little snack.

But when making a sandwich, you need two slices of bread of the same thickness. If you had to cut them yourself, that may not happen. One may be thicker than the other -- one of life's little annoyances.

Well, that changed in the late 1920s. An inventor in the United States brought an innovation to the world of bread. Otto Frederick Rohwedder invented the bread slicer. The machine cut the bread into individual slices of the same size.

Soon after, he invented a machine that sliced the bread and then packaged it. Later, a small machine to toast the bread was invented. The slices fit neatly into the toaster. Toasters can be found in homes across the U.S. and other countries.

So, being described as the "best thing since sliced bread" is high praise, indeed.

A: So, what do you think of the chief's new policy on paid leave?

B: It's the best thing since sliced bread! I'm going to use the extra vacation time to visit friends in Paris.

Please note: People also use the expression as an insult.

Let's say you know someone who thinks very highly of herself. she thinks she can do no wrong. You don't agree. You could say, "She thinks she's the best thing since sliced bread."

Until next time, I'm Anna Matteo.

slice –n. a thin flat piece cut from something: a slice of bread, a slice of cake –v. to cut with or as if with a knife

destination –n. a place to which a person is going or something is sent

loaf –n. a shaped or molded mass of bread

annoyance –n. a source of vexation or irritation

toast –n. sliced bread browned on both sides by heat : –v. to make (food, such as bread) crisp, hot, and brown by heat