Thoughts of Peace, Uniting Fighters Fade Away with Afghan Violence

Update Required To play the media you will need to either update your browser to a recent version or update your Flash plugin.
By Susan Shand
21 September, 2019


Chances for peace in Afghanistan appeared less likely this week after another suicide bomb attack. At least 15 people were killed in the bombing Thursday in the country's south. The Taliban claimed responsibility. More than 70 people have died across the country in suicide attacks this week.

The violence is expected to increase as Taliban forces have said they will attack voting centers before Afghanistan's planned presidential elections.

The bombings include an attack earlier this week targeting President Ashraf Ghani. They follow the collapse of peace talks between the United States and the Taliban.

Some observers worry that the growing anger and hatred may make any peace deal even more difficult to negotiate.

United States officials are concerned about what would happen to the Taliban's 60,000 full-time fighters. If a deal can be reached, they would be forced to put down their weapons and find a new way to live within the communities they once battled.

The reintegration of former fighters "will be critical for Afghanistan to (find) lasting peace... a goal crucial to U.S., coalition and Afghan interests," says a new report. It comes from the Office of the Special Inspector General for Afghanistan Reconstruction (SIGAR), an agency of the U.S. government.

How to employ former fighters?

The difficulty of reintegration will be a test for any peace deal. In addition to the full-time Taliban fighters, U.S. officials estimate there are 90,000 seasonal fighters who will need to find other work.

But Afghanistan's economy is struggling. Economic difficulties have been brought on by drought conditions as well as low growth and high unemployment.

U.S. officials also worry about government corruption and the appeal of criminals who profit from illegal drugs.

Put together, it is enough for SIGAR to warn that conditions are not right for "a successful reintegration program."

If there ever is a peace deal, the failure to reintegrate tens of thousands of Taliban fighters would be costly. 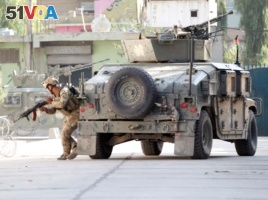 A member of Afghan security forces takes position near the site of an attack in Jalalabad city, Afghanistan, Sept. 18, 2019.

However, the problem of reintegration of former fighters may be far off.

This week the U.S. government called the latest Taliban attacks "cowardly." President Donald Trump "has made clear that he will not negotiate a peace agreement while the Taliban continues such attacks," officials said.

The Afghan ambassador to the United States, Roya Rahmani, said last week: "We know peace is on the horizon...we also know it will come on our terms."

Separately, the Taliban have been reaching out to Russia, China and Iran in the hopes of finding ways to force U.S. forces to leave Afghanistan.

The developments have some former U.S. military officials warning that reintegration may not be possible in the near future.

"I never thought negotiations with the Taliban were a good way to go," retired Admiral William McRaven said Wednesday.

McRaven is a former U.S. Special Operations Command Commander. He is best known for directing the raid that led to the death of al-Qaida founder Osama bin Laden in Pakistan in 2011.

McRaven warned that the U.S. military will have to stay in Afghanistan to contain the Taliban for years to come. A deal with the Taliban and the withdrawal of U.S. troops from Afghanistan would mean "it won't be six months or a year before all the blood and treasure we have put into Afghanistan will have been reversed," he said.

reintegration – n. returning people to their original society or status

cowardly – adj. fearful; opposite of bravery

horizon – n. the line where the earth or sea seems to meet the sky, in the near future

reverse – v. to go backwards, to return to earlier conditions