Update Required To play the media you will need to either update your browser to a recent version or update your Flash plugin.
By VOA
27 December, 2016

Rubi Ibarra just celebrated a birthday she will never forget

Rubi is a teenager. She lives in the small community of La Joya in northern Mexico.

She turned 15 years old. So, her family planned a traditional quinceañera for her. A quinceañera is an important coming-of-age party for girls turning 15.

Her family created a Facebook event page for the party. The invitation was listed as public. That means anyone using Facebook could see it. 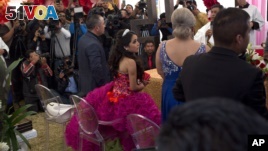 Rubi Ibarra looks at her mother Anaelda as journalists struggle to get images during a Mass as part of Rubi's down-home 15th birthday party in the village of La Joya, San Luis Potosi State, Mexico, Monday, Dec. 26, 2016. Millions of people responded to the invitation for Rubi's Dec. 26th coming of age party in rural northern Mexico, after her parent's video asking "everybody" to attend went viral.(AP Photo/Enric Marti)

A few weeks before the party, a photographer placed a video to the page. The video showed Rubi's father describing what his daughter's party would be like. Crescendio Ibarra said there would be local musicians, food, prizes and horse races. He said "everyone is cordially invited." By everyone, the Ibarra family later explained, he simply meant everyone in nearby towns.

But the public invitation quickly went viral. As a result, "everyone" who saw it thought they were invited. More than 1 million people said on Facebook that they planned to attend the quinceañera.

The original video was seen millions of times on YouTube. Mexican music stars and personalities joked about attending the party.

Even a Mexican airline company offered low prices on flights to a city near Rubi's hometown. Its advertisements for the offer said, "Are you going to Rubi's party?"

The party was held on Monday, December 26. And, while 1 million people did not actually attend, Univision reported that more than 30,000 people showed up to help Rubi celebrate her 15th birthday.

Photographers and reporters from around the world were present. The Associated Press described the Mexican teenager as looking a bit "overwhelmed" by the attention, but "resplendent" in her dress.

Jose Antonio Sosa is an expert on social media at the Iberoamericana University. He said that Mexico's great interest in Rubi's party showed a desire for lighter, happier stories in the news.

Ashley Thompson adapted this story from an Associated Press report. George Grow was the editor.

viral - adj. spreading very quickly to many people especially through the Internet

overwhelmed - v. have a strong emotional effect on.