Update Required To play the media you will need to either update your browser to a recent version or update your Flash plugin.
By Bryan Lynn
27 April, 2018


Thousands of girls have now joined the Boy Scouts of America, or BSA, across the United States.

The previously all-male organization announced last year it would begin permitting girls to join the Cub Scouts in 2018. The Cub Scouts is a similar group for younger children.

The BSA also plans to create a new program next year for older girls wishing to join the organization.

The Cub Scout program officially begins nationwide later this year. But the BSA gave local councils the choice to get started earlier than planned. About two-thirds of U.S. councils chose to begin early, with about 3,000 girls accepted into the Cub Scouts so far. 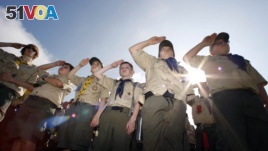 When the new program for older girls begins, it will let them earn the highest level of scouting in the BSA, the rank of Eagle Scout.

BSA spokeswoman Effie Delimarkos said the organization had received a clear message that many girls could not wait to join. "We heard from our families, 'OK, you've made the decision. Can you please give us a way to do this right now because we've got families and daughters that are just really excited about it," she said.

Delimarkos added that the Boy Scouts have received many reports that girls have been warmly welcomed by leaders and the boys themselves.

Tuck Pescosolido is a Cub Scout leader in Durham, New Hampshire. He told the Associated Press some of the new female members are friends the boys suggested, while others are sisters of Scouts.

One of his recent projects involved the Cub Scouts building wooden toolboxes. Pescosolido said the only difference he saw was that some girls remained a little calmer than the boys. He added that the girls were just as active in the project as the boys, but did not become as easily distracted by other things.

Boy Scouts of America officials have said the decision to admit girls was made, in part, to make things easier for busy families. But the move was criticized by the country's other major scouting organization, the Girl Scouts of the USA.

Girl Scout officials have suggested the change was driven partly by a need to raise money because of BSA's financial problems.

The leader of the Girl Scouts in the New Hampshire area, Patricia Mellor, said the BSA's decision should also not have been made just to make things easier for families.

"You've made the choice for your son based on what you thought was best for him, and the daughter should be getting a similar decision," Mellor told the Associated Press. "We know facts prove that the Girl Scout program is the better program for the girls and young women we serve," she added.

Bryan Lynn adapted this story for VOA Learning English, based on a report from the Associated Press. Mario Ritter was the editor.

council – n. a group of people who elected or chosen to give advice or make decisions