Thousands of Immigrants Arrive to New York and D.C.

Update Required To play the media you will need to either update your browser to a recent version or update your Flash plugin.
By This story was
28 August 2022


Two governors in the United States have transported thousands of foreigners to New York City and Washington, D.C. in recent weeks.

The travelers had been among large numbers of foreigners staying in the U.S. along its border with Mexico. All are seeking asylum in the United States. 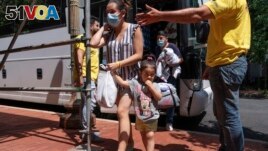 Silvia Moreno del Castillo, center, of Lima, Peru, holds her daughter Brisa, 3, by the hand, followed by her husband Gerardo Puente. They were sent from Arizona to Washington arriving on Aug. 11, 2022, to a church on Capitol Hill in Washington. (AP Photo/Jacquelyn Martin)

About 8,000 migrants have arrived in Washington and New York City since. Leaders of those cities are seeking federal assistance to deal with the series of new arrivals.

In both D.C. and New York, social service and religious groups have worked to support new arrivals. They have offered temporary shelter, medical attention and often transportation to the next stop on a migrant's travel plan.

On a recent August day, a bus carrying 41 migrants from Arizona arrived at a Christian religious center in Washington's Capitol Hill neighborhood. Workers from SAMU First Response, an international aid agency, were there to help the newcomers.

Within minutes the migrants were inside, enjoying a hot meal and filling out arrival forms.

Texas buses arrive haphazardly, said Tatiana Laborde, the aid group's managing director. It will hear from other aid groups that a bus carrying a certain number of people has left Texas. At some point 48 hours later, that bus drops off riders at Washington's Union Station.

Arizona provides detailed, printed information about passengers including their nationalities and expected arrival times. The state also deploys medical workers on the transports.

Where they come from

Manuel Castro is New York City's immigration chief. He said: "Many are fleeing persecution and other very severe circumstances. They're confused. And we want to make sure that we support them as much as possible...."

Many of those who arrive in Washington do not stay long. Mayor Muriel Bowser recently made her second request to the U.S. military for National Guard support. In her request, she said most migrants stay up to three days in D.C. before moving elsewhere.

Many of the migrants come from Venezuela. In the last two months, the number of Venezuelans seeking refuge in the United States has quickly grown. In July, U.S. border forces stopped Venezuelans more than 17,000 times. That is up 34 percent from June and nearly three times as much from July 2021.

The United States does not recognize the government of Venezuelan President Nicolas Maduro. The lack of official recognition makes it more difficult for the country to take back asylum-seekers from the U.S. The Mexican government also refuses to accept the migrants, which leaves the U.S. few ways to handle Venezuelan migrants.

Kelin Enriquez is one of the Venezuelan migrants. She and her children first arrived in Washington and later went to a family center in New York to plan the family's next steps.

"No one leaves their land because they want to," she said. "We want to work. We want a better opportunity."

This story was adapted for VOA Learning English based on reporting by The Associated Press.

haphazard — adj. having no plan, order, or direction

dump — v. to put (something) somewhere in a quick and careless way

persecute — v. to treat cruelly or unfairly especially because of race or religious or political beliefs

circumstance — n. a condition or fact that affects a situation

opportunity — n. n amount of time or a situation in which something can be done