Update Required To play the media you will need to either update your browser to a recent version or update your Flash plugin.
By Anna Matteo
19 February 2021


A Texas town on the Gulf of Mexico has been experiencing a record-breaking winter storm. The people there are facing difficulties that come with such extreme weather -- power outages and shortages of food, water, and gas.

But the people of South Padre Island are also facing another difficulty – cold-stunned sea turtles in the surrounding waters.

Cold-stunned sea turtles float to the surface, where they can forget to breathe and drown. They are unable to avoid harm from boats or other dangers such as hungry animal predators. 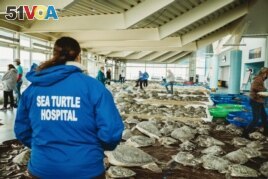 For the past several days, wildlife experts and South Padre Island locals have rescued nearly 5,000 sea turtles from the icy cold conditions.

"So, this is the largest recorded cold stunning event ... in history. In 1980 an organization was created that tracks these kinds of events ... and it is the single largest cold stun event that they have ever tracked."

That is Wendy Knight. She is executive director of Sea Turtle Inc. The non-profit organization is responsible for a large part of South Padre Island's coastline. The organization has been helping to treat the majority of the cold-stunned sea turtles, with much help from the community.

Allen Foley is a marine biologist with the Florida Fish and Wildlife Conservation Commission. He explains that cold-stunned sea turtles are not actually injured...yet.

"But in cold stunning events, the turtles aren't injured. And even though their bodies are affected, it's only a temporary thing. Once they get into a little bit warmer water they quickly rebound and are perfectly fine. ... It's a lot of work and it's a lot of turtles in some events. But the end product is you have a really high success rate."

"When turtles are rescued and protected from scavengers and predators and they're put into temperatures that are okay for them within a day or 2 or 3 their chances of survival in places like Florida and Texas are really good."

Knight says she is in awe of how South Padre Island community members have come together to help the turtles while dealing with struggles of their own.

"It is ... it is awing. We've had hundreds, even thousands of volunteers participate in this process. Most of those people have not had power, electricity, heat...They have personal tragedy happening in their own lives and they're spending 12 and 15 hours a day with us and our staff...That is awing ... when people put their own needs aside to help something that cannot help itself."

On its website, the United States Fish & Wildlife Service lists the sea turtle species found in Texas as either endangered or threatened. Foley predicts that because of the fast actions taken, many of the sea turtles will be saved.

Sea Turtle Inc., Knight explains, was created in 1977 by and for people who cared about sea turtles. The massive cold stun event and the resulting community reaction, she says, is a defining time for South Padre Island.

"It defines what South Padre Island is and the kind of community we are here. And how much we take responsibility for the protection of this endangered species."

Many people in the community helped in the rescue effort, including leaders in business and government.

Ed Caum is executive director of the South Padre Island Convention and Visitors Bureau. When Sea Turtle Inc. did not have power and needed more room for the rescued turtles, he opened the doors to the convention center. The large building itself did not have power during part of the storm.

Knight describes the community-wide help as "Herculean," or requiring great strength and effort.

"Ed (Caum) and the South Padre Island Convention and Business Bureau opened their doors and let us put 4,200 sea turtles on the floor of their convention center...It's Herculean the effort that people have put in."

Cold stuns, Foley says, happen often. But they are usually not as big as the one Texas is experiencing. Florida, he says, also had a large one back in 2010.

"And actually in Florida, we pretty much have cold-stunned turtles every year, just not thousands."

While the events can be hard on the turtles and the volunteers who save them, cold stuns give scientists valuable information about the animals.

Sea turtles can be secretive animals, Foley explains. But during a cold stun event, those secrets can be learned. Foley says that once a cold-stunned sea turtle comes on land, it can be tagged and studied. Scientists can examine the movement of a sea turtle and also observe its changes in growth, disease, and injuries.

For Wendy Knight, the recent cold stun has shown her something else. It has been a lesson in how effective a widespread community effort can be.

scavenger – n. an animal (as a vulture) that feeds on dead or decaying material

track – v. to search for by following evidence until found

marine – adj. of or relating to the sea

awe – n. a strong feeling of fear or respect and also wonder : awe – v. to fill (someone) with awe

tragedy – n. a very sad, unfortunate, or upsetting situation : something that causes strong feelings of sadness or regret

collaboration – n. to work with another person or group in order to achieve or do something