Update Required To play the media you will need to either update your browser to a recent version or update your Flash plugin.
By Mario Ritter Jr.
14 February 2020


What is being kept in a small space because of the new coronavirus like? Passengers on a vacation trip in the western Pacific Ocean know very well.

They are on the Diamond Princess, a huge, cruise ship that is quarantined in the Japanese port of Yokohama.

The number of cases from the ship is the largest group of infections in the world outside of China.

The Associated Press spoke with passengers and looked at their communications on social media.

Some people are making the best of it

Even during the quarantine, Cheryl and Paul Molesky appeared to still be on vacation. 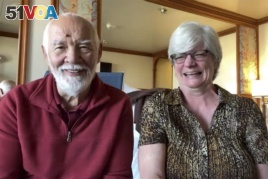 In this image from a video taken on Wednesday, Feb. 12, 2020, Paul Molesky and Cheryl Molesky are interviewed through Skype in their cabin room on the Diamond Princess, anchored at a port in Yokohama, near Tokyo.

The two Americans from Syracuse, New York, can be seen in YouTube videos relaxing, often in bathrobes. They appear to be enjoying themselves looking at the ocean and snow-covered Mount Fuji in the distance.

"We try to have an upbeat presentation...we're not hurt, we're not in pain...we're actually just enjoying ourselves," said the 78-year-old Paul Molesky.

She said they are concerned when a new group of cases is announced. But she added there was little they could do: "We decided to make the most of every day."

Less space and room to move

One Japanese man in his 30s, who did not want to give his name, said he spends his days mostly taking pictures of each meal. He then posts them anonymously on Twitter.

The ship has restaurants and many forms of entertainment, but they are mostly closed. Passengers now mostly must stay in their rooms.

Less costly rooms on the ship are not much wider than a double bed. Pictures posted on the ship's website show that there is space only for a desk chair. The least costly rooms do not have windows. The larger rooms are about 20 square meters or less.

People on the ship must clean their own rooms and clothes. Contact with the crew has been limited since the first 10 cases were confirmed in early February.

For many, the days now center on food service. One crew member wearing a mask and gloves hands out the plates, another provides other things needed for the meal, while another notes names and room numbers.

The boat has added more movies and TV channels to try to help with the boredom. People without balconies are permitted to walk outside for about an hour each day. They must keep two meters apart, however, to avoid spreading the virus. Passengers talk and wave to each other from their balconies.

For the Japanese man on the ship, the food is one of the biggest problems. "I miss Japanese food," he said.

Some people are afraid

A recent video posted on Twitter shows a group of men wearing masks and what appears to be the clothing of kitchen workers. One man, identified as Binay Kumar Sarkar, says, "We are scared. We appeal to the Indian government and the United Nations to help us."

Some of the crew members who got infected with the virus are restaurant, bar or housekeeping workers. They most likely had contact with passengers until those services were closed.

"Until the quarantine started, everything was business as usual, and everyone was freely moving around," said Kazuho Taguchi. He is director of global health cooperation at Japan's health ministry.

Crew members still share rooms, as the number of cabins for them is limited, Taguchi said. But, one crew member said he had been isolated in his room two days after he reported a pain in his throat.

"Everyone on the ship is scared. Many people are falling sick, and now the crew's getting sick too," he said. While he waits for test results, he has been reading all the news and communicating with friends and family.

Officials in Japan say isolating people on the ship is one way to prevent the disease's spread. Other experts argue the measure could create more infection.

Reiji Goto is a doctor at Diayukai General Hospital in Ichinomiya. He told TBS television: "More and more people are getting infected while they are trapped on the ship, which is not good for disease prevention."

Tara Smith is a professor who studies infectious diseases at Kent State University's College of Public Health in the United States. She said a hospital, not a ship, is the best place to keep people quarantined. Smith added that she has concerns about new infections and the passenger's mental health.

For some, however, the fear might be worse than the virus. Many people, for example, do not show strong signs of infection with the COVID-19 virus.

On Thursday, an Australian mother and daughter spoke to Australia's Nine Network television from a Japanese hospital. The two said officials took them off the ship after a test showed that the daughter, Bianca D'Silva, was infected with the new coronavirus.

She said health workers put her in a wheelchair covered with a protective material.

Bianca and her mother, Suzanne, said they were both briefly sick, but feel fine now.

"Honestly, it just felt like your everyday cold," Bianca said. "I had a bit of headache before and just a slight fever but that's about it, honestly," she added.

quarantined –adj. being kept apart from others in order to prevent a disease from spreading

anonymously –adv. not named or identified

boredom –n. the state of being bored, of not having anything to do of interest

balcony –n. a raised area on the side of a building or ship that lets a person step outside from a room in a tall structure

isolated –adj. apart from others