Update Required To play the media you will need to either update your browser to a recent version or update your Flash plugin.
By Susan Shand
12 December, 2018


For the first time in more than a century, bilbies are running wild in Southeastern Australia.

The small animals were once widespread across much of Australia, but were last observed in the wild in New South Wales state in 1912.

Every year bilby populations continue to decrease. Wildlife experts are afraid that the bilby, a small marsupial, could eventually disappear forever, either because of land clearing or fires. Another reason is a threat from cats and foxes, which hunt down and kill bilbies.

In northern New South Wales state, environmentalists are celebrating what they are calling a historic moment. 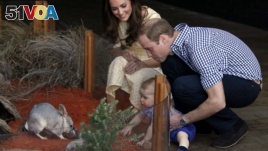 Catherine, the Duchess of Cambridge, and her husband, Britain's Prince William, watch as their son Prince George looks at an Australian animal called a bilby during a visit to Sydney's Taronga Zoo, April 20, 2014.

Thirty bilbies from a captive breeding program have been released into a large predator-free enclosed area north of Sydney.

Without the protection of a 32-kilometer fence, experts say the animals probably would not survive.

Tim Allard heads the Australian Wildlife Conservancy, which is involved in the project.

He says the release of these beloved animals is a big deal.

"Bilbies only really survive behind fenced areas. There are some remaining wild bilby populations, but they get predated upon heavily by feral cats and foxes."

Allard said the point of doing this project is to return the countryside to what it used to be before Europeans arrived.

"So in the not-too-distant future, you will be able to go inside the fenced area and it will be like stepping back before Europeans turned up," he said.

Bilbies are known for their long ears and large back legs. They usually sleep during the day, and are awake at night. They look a lot like rabbits and grow to about 2.5 kilograms.

Australia has one of the world's worst rates of mammal extinctions. The bilby project is seen as an important part in protecting the nation's wildlife.

Phil Mercer reported this story for VOANews. Susan Shand adapted it for Learning English. The editor was George Grow.

Write to us in the Comments Section or on 51VOA.COM

marsupial – n. a kind of animal that carries its young under a piece of skin on the mother's stomach

breeding – n. the act or process of producing plants or animals

mammal – n. a kind of animal that feeds milk to its young and that usually has hair covering most of its skin