Update Required To play the media you will need to either update your browser to a recent version or update your Flash plugin.
By Anne Ball
02 October, 2017


Three American scientists have won the 2017 Nobel Prize in Physiology or Medicine.

The three were recognized for their work on the body's daily rhythms -- the biological processes that our bodies repeat over and over again. These actions affect the way a person feels.

The Nobel committee says the scientists' work has opened up new areas of research and increased understanding about the importance of getting enough sleep. 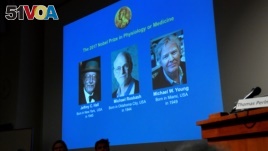 The names of Jeffrey C. Hall, Michael Rosbash and Michael W. Young are displayed during a news conference to announce the winner of the Nobel Prize in Physiology or Medicine 2017, in Stockholm, Sweden, Oct. 2, 2017.

Circadian rhythms adapt the workings of the body to different times of the day. They can influence sleep, behavior, body temperature and the natural processes for breaking down food and making energy.

The scientists were able to see inside our biological clock and explain its inner workings, the Nobel statement said.

A Nobel report said that our well being is affected when the circadian rhythms are not in balance. One example is jet lag – a condition many people experience after a long flight.

Your biological clock is "off" when you fly great distances, passing over many time zones. When you reach your final stop, it takes time to adjust to the new time. If one's circadian rhythm is off, the person can develop disorders like insomnia, depression and even heart disease, over time.

The scientists studied insects, fruit flies, as model organisms for their work.

"I am very pleased for the fruit fly," said Michael Rosbash, a professor at Brandeis University in the eastern state of Massachusetts. Rosbach said he got a telephone call about the award just after 5 in the morning, local time. He said that when the phone rings at that time, "normally it is because someone died."

Rosbach told the Associated Press "I'm still a little overwhelmed," adding "I stand on the shoulders of giants. This is a very humbling award."

Michael Young is at Rockefeller University in New York City; Jeffrey Hall was a visiting professor at the University of Maine, but said his prize work was done at Brandeis.

Hall, who is 72 years old, said that he was already awake when the call informing him of the prize came around 5 a.m. Hall said he was awake because age-related changes in his own circadian rhythms mean he gets up early in the morning.

Michael Hastings is a scientist at Britain's Medical Research Council. He said the discoveries had opened up a whole new field of study for biology and medicine.

"Until then, the body clock was viewed as a sort of black box," Hastings told the AP. "We knew nothing about its operation. But what they did was get the genes that made the body clock, and once you've got the genes, you can take the field wherever you want to."

"It's a field that has exploded massively," he told the AP. And, he said, is because of the work of these researchers.

Their work goes back to 1984 when the three men were able to separate out the "period gene" in fruit flies. Hall and Rosbash found that a protein encoded by the gene increased during the night and weakened during the day. Then 10 years later, Young reported the discovery of another "clock gene."

Today scientists are looking for new treatments based on the circadian cycles. They include establishing the best times to take medicines as well as increased attention on the importance of a good night's sleep.


The Associated Press and Reuters news agency reported on this story. Anne Ball adapted their reports for VOA Learning English. George Grow was the editor.

circadian – adj. relating to the regular changes in a person or thing that happen in 24-hour periods

clock – n. a device that shows what time it is and that is usually placed in a room or attached to a wall

jet lag – n. a tired and unpleasant feeling that you sometimes get when you travel by airplane to a place that is far away

time zone – n. any one of the world's 24 divisions that has its own time

giant – n. a legendary creature usually thought of as being an extremely large and powerful person