Update Required To play the media you will need to either update your browser to a recent version or update your Flash plugin.
By VOA
01 March, 2015


Britain has become the first country to permit doctors to use genetic material from three people to create human embryos. The process is called "mitochondrial replacement therapy." But some call it making "three-person babies."

The treatment is meant to help women avoid passing certain diseases and disorders to their children.
Members of Britain's upper house of parliament approved the measure in a vote on Tuesday. The lower house passed it earlier this month.

Public reaction and debate was immediate. The therapy could potentially end several severe, sometimes deadly, health problems. But the process behind that goal frightens many people and offends some others.

Here is the science of mitochondrial replacement therapy, or MRT. 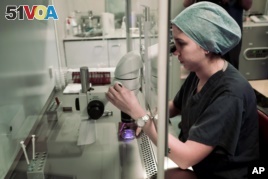 An embryologist at work at a fertility clinic in London.

A human is made from the genetic information provided by our mother and father. Almost all our DNA is in the nucleus of our cells. That DNA is called nuclear DNA and makes up about 99.99 percent of our genes.

Mitochondrial DNA does not create the color of your hair or the texture of your skin. It does not make you walk like your mom or talk like your dad. The genes that create the personal characteristics that make each of us individual are in the nuclear DNA.

Instead, mitochondria have one major job. They use oxygen to help the body turn food into energy. The mitochondria are like the cell's power factory.

A small percentage of women have mitochondrial mutations that can be passed on to children. These mutations cause severe diseases in an even smaller number of those children.

Worldwide about one in 6,500 children suffers from mitochondrial disease.

Mutated mitochondria do not always make children sick. But healthy girls with such mutations still could face the problem of passing the mutations, and possible disease, to their own children.

The nucleuses of both eggs are removed. The mother's egg nucleus is then placed in the donor's egg, which has healthy mitochondrial DNA. Then, doctors use the father's sperm to fertilize the egg. The resulting embryo is put into the mother's womb.

But MRT does not necessarily result in just one genetically modified individual. If the individual is female, the genetic changes would also be passed to children born to her. That genetic alteration is permanent.
Scientists have experimented with crossing the germ line on insects and animals. But the research is new. Scientists have known of the existence of mitochondrial DNA for only about 50 years.

There is no way to know the long-term impact of introducing unrelated mitochondrial DNA to human embryos until it is actually done. And, even then, several following generations would have to be studied.

So the unknowns scare many people. Their fear should not be a surprise considering the public's concern over genetically modified food.

People with human health concerns are joined by others offering wide ethical and religious arguments.

Critics of MRT say it is the first step onto a dangerous path of human gene engineering. They warn of "designer babies" in the future.

For example, they fear people will use genetic technology to create babies with certain traits, such as blue eyes, high intelligence or athletic ability.

But MRT supporters dismiss this argument. Robert Klitzman is a bioethicist and professor of psychiatry at Columbia University in New York City. He recently wrote an opinion piece supporting mitochondrial replacement therapy for the "Wall Street Journal."

"I would argue that it's not, that this is equivalent to changing the batteries in some fancy machine. The machine is the same. Sort of like getting a blood transfusion or an organ transplant, it doesn't change the identity of the person."

Anglican Church officials in Britain spoke out against the measure to approve mitochondrial replacement therapy. The Church supports some embryonic study for the purpose of easing human suffering. But Anglican leaders say too little is known about the part mitochondria plays in heredity. They argue that more research must be done to guarantee the therapy is safe, ethical and effective.

The Roman Catholic Church goes further. It strongly objects to the destruction of embryos that can result from MRT. But it also says the process attacks the dignity of human life.

Christa Lopicollo is Executive Director of the Department of Life Issues with the Catholic Archdiocese of Washington.

"It threatens the dignity of the child to be seen as a product of technology rather than a product of love, and threatens the dignity of the marriage as well by adding an additional parent into the picture here. The Church recognizes than an embryo, while very, very early in life, is still a unique distinct life that deserves respect and protection."

MRT interest in the US

Scientists in the United States were among the leaders in researching mitochondrial replacement therapy. They are seeking permission to move forward with the process in the U.S.

The U.S. Food and Drug administration held a conference on the issue a year ago. The agency has also asked the independent Institute of Medicine to examine the ethical and social issues connected to the treatment.

But some say the government is not moving fast enough. Susan Solomon is the chief executive officer of the New York Stem Cell Foundation. She wrote an editorial in "Roll Call," a newspaper covering the U.S. Congress and politics.

Ms. Solomon noted that U.S. researchers helped develop the treatment and yet American women cannot benefit from that effort. She criticized lawmakers, the president and federal agencies. She wrote that they had "half-ignored, half-slighted the issue" of mitochondrial replacement therapy. Ms. Solomon called on congress and the federal government to act now. She wrote that debate over MRT cannot, in her words "continue delaying our ability to save lives now."

Is it a good idea to use the genetic material from three people to create a baby free of mitochondrial mutations? Or is science going too far in engineering human life? We want to hear your opinions about the issue. Post your thoughts in the comments section.

organelle – n. a specialized cellular part (as a mitochondrion, lysosome, or ribosome) that is analogous to an organ

modification – n. the act or process of changing parts of something

heredity – n. the natural process by which physical and mental qualities are passed from a parent to a child