Update Required To play the media you will need to either update your browser to a recent version or update your Flash plugin.
By Mario Ritter Jr.
09 October, 2019


Three men who made rechargeable lithium-ion batteries possible have won the 2019 Nobel Prize for Chemistry.

The invention of the lithium-ion battery has had a deep influence on modern life. It has made listening to music, watching television and communicating on electric devices something that can be done almost anywhere. 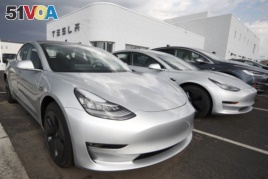 Tesla Model 3 is one of many electric vehicles powered by lithium-ion batteries. (AP Photo/David Zalubowski, File)

Story of the lithium battery

Whittingham started his research into lithium batteries in the 1970s at a time when world oil prices were high and energy availability a big concern. He developed a battery that combined lithium and titanium disulfide. It could produce two volts of power, but it was too explosive to be useful. But the British-American researcher established that lithium ions could be held by a special material to create a lightweight battery.

Goodenough found that combining lithium with cobalt oxide could produce a more powerful battery, one that produced four volts. His research was an important step in the development of more powerful and safer batteries.

Using Goodenough's design as a starting point, Yoshino developed the first commercially available lithium-ion battery in 1985. Yoshino's design used a carbon-based material to hold lithium ions. That made the battery lightweight and able to be recharged many times.

The Nobel committee said that lithium-ion batteries "have laid the foundation of a wireless, fossil fuel-free society, and are of the greatest benefit to humankind."

Reaction to the announcement

Yoshino spoke on Japanese television after hearing that he and the other winners were being recognized for helping the environment.

"I am happy that (the) lithium-ion battery won the prize in that context," he said.

Yoshino and Goodenough have developed a close relationship over the years. Yoshino said that Goodenough is like a father and he goes to Texas every year to see him.

Gregory Offer is an expert in mechanical engineering at Imperial College London. He called the German-born Goodenough's work "one of the key enabling technologies of the 21st century."

The three scientists will share the prize worth $918,000. They will receive their gold medals and be honored at the Nobel ceremony in Sweden on December 10.

battery – n. a container made of one or more cells, in which chemical energy is used to create power

fellow – n. a member of a group; a person appointed to a position for study or research

application - n. use; a way of using something

portable – adj. able to be carried or moved from place to place

commercially – adv. related to being able to be sold to people and used widely

benefit – n. something that produces helpful or good results