Update Required To play the media you will need to either update your browser to a recent version or update your Flash plugin.
By VOA
17 August, 2015


Public anger is growing in China following last week's deadly explosions at a warehouse in the northern port city of Tianjin. Officials there announced the death toll continues to rise: 114 are confirmed dead and 70 others are still missing.

On Monday, angry residents gathered outside a building where Tianjin officials spoke to the media. Some protesters carried pictures of the injured. The images showed people whose faces were cut, or who wore bandages on their heads and arms.

The residents are asking the government to hold talks with them and provide answers about what happened. The explosions have forced about 6,000 people to leave their homes.

"Now our homes have been destroyed, can't the government give us an explanation?" asks a 60-year old woman. "You can't just tell us all you are going to do is give us new windows. What about all the other stuff in the house? Why should we have to pay for this?"

Another resident says the media has not talked about the people who have lost their homes. Li Chengze says, "We feel like we've been forgotten."

Officials did not give clear answers about what the government plans to do to help displaced residents. They say they are investigating the disaster. And, they say, if they learn that anyone violated the law, they will punish whoever is responsible. 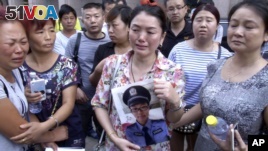 In this image taken from a video footage from AP Video, a woman holds up a photo of her son, a missing firefighter, outside a hotel where officials held a daily media conferences in northeastern China's Tianjin municipality, Aug. 16, 2015.

Many are asking why a warehouse that contained dangerous chemicals was permitted to operate so close to people's houses. Chinese media have suggested the answer is political connections.

A financial magazine called Caijing reports that one of the shareholders of the company that owns the warehouse may be the son of a former Tianjin police chief.

The report says the son, Dong Mengmeng, was a shareholder "for some time in the past."

And, the report says the company's list of shareholders raises further questions. Those who are said to be major controllers of the company may be shareholders only in name.

Officials permitted the company, Ruihai International, to store dangerous chemicals in the warehouse for a short time. A study at the time found the site had some environmental risks, but it was safe enough to operate.

Now, people are growing increasingly concerned about the possible spread of sodium cyanide following the blast. Sodium cyanide releases a gas that interferes with a person's ability to breath. The explosion also included a deadly combination of other dangerous chemicals.

Chinese authorities appear to be trying to stop rumors and further public panic about the effects of the blasts. State media also note that officials are taking measures to monitor air and water quality around the site of the blasts.

Even so, the vice mayor of Tianjin told reporters on Monday that 700 tons of sodium cyanide remain in the area.

Officials are telling residents not to worry. But weather forecasters are predicting rain, and with the rain come concerns that the chemicals could spread.

Bill Ide reported this story from Beijing. Kelly Jean Kelly adapted it for Learning English. Hai Do was the editor.

resident(s) – n. people who live in a particular place

displaced – adj. forced to leave the area where one lives

sodium cyanide – n. sodium cyanide is a powder that releases hydrogen cyanide gas, a highly toxic chemical that interferes with the body's ability to use oxygen.

forecaster(s) – n. people who predict the weather after looking at the available information