Update Required To play the media you will need to either update your browser to a recent version or update your Flash plugin.
By Mario Ritter
09 December, 2015


Time magazine has named German Chancellor Angela Merkel its "Person of the Year" for 2015.

Merkel recently observed the 10th anniversary of being leader of Europe's largest economy. She has been called the most powerful woman in the world. And she is the first woman to lead Germany.

Time magazine praised "her resilience and leadership when faced with the Syrian refugee crisis and turmoil in the European Union over its currency this year."

Time's Nancy Gibbs said the 61-year-old leader has emerged as an "indispensable player" in Europe.

Gibbs also said she was named, "For asking more of her country than most politicians would dare, for standing firm against tyranny."

Merkel was elected to her position in November 2005 as head of the Christian Democratic Union (CDU). 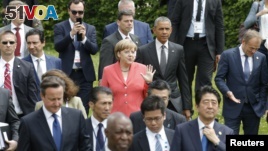 German Chancellor Angela Merkel (C) and U.S. President Barack Obama arrive with other G7 participants for a family picture at the G7 summit at the Elmau castle in Kruen near Garmisch-Partenkirchen, Germany, June 8, 2015.

The future leader was the daughter of a religious worker in East Germany. She received a doctorate in chemistry, not politics. She became involved in politics after the fall of the Berlin Wall and reunification of Germany in 1989.

She became head of the Christian Democratic Union in 2000.

In her early years as chancellor, Merkel was often criticized for "leading from behind" and avoiding conflict.

In recent years, crises have tested German politics and the country's people. The Greek financial crisis threatened not only the southern European nation's creditors, but the euro itself. The euro is the common currency used by 19 European Union nations.

In its explanation of choosing Merkel as its "person of the year," Time noted other European crises such as Russia's annexation of Crimea. Time said Merkel provided leadership in the West's response to, what it called, Vladimir Putin's "creeping theft of Ukraine."

She has enjoyed wide popularity in Germany where some call her "mutti," or mommy. She has been able to use that popularity to support the acceptance of hundreds of thousands of refugees and migrants from the Middle East. While many countries built barriers to refugees, she continued to offer to take them in. Time said she avoided "the reflex to slam doors, build walls and trust no one."

What do you think of Merkel as "Person of the Year?" Please let us know what you think in the Comments section and on 51VOA.COM, thanks!

resilience –n. the ability to become healthy and strong after something bad happens

turmoil –n. a state of confusion or disorder

annexation –n. to take control of a territory

reflex –n. something done without thinking in reaction to some event or action