Times Are Changing in Havana, Cuba

Update Required To play the media you will need to either update your browser to a recent version or update your Flash plugin.
By Adam Brock
08 February, 2016

Old men in fedoras smoke cigars and play dominos. Colorful American cars from the 1950s share the road with rusty bicycles. Laundry hangs from the balconies of crumbling mansions. Children who have never used the Internet play soccer on cobblestone streets. The sound of traditional Cuban music drifts from a corner café.

This is the Havana that American tourists dream of—romantic, mysterious, and forbidden.

Classic American cars from before the revolution are a common sight on the streets of Havana.

American citizens cannot legally travel to Cuba as tourists. The tourism ban goes back to the early 1960s, when tensions between the U.S. and Cuba were high. Cuba's communist government had formed a close relationship with Russia, formerly known as the Soviet Union. In 1962, the Soviet Union placed nuclear missile silos in Cuba. 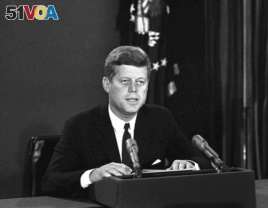 For 13 tense days, it looked like the U.S. and the Soviet Union would go to war over the missiles in Cuba. Fortunately, the countries reached a diplomatic solution. The event is known as the Cuban Missile Crisis. It is the closest the world has come to a thermonuclear war.

The tourism ban is part of a trade embargo on Cuba started by President John F. Kennedy. The ban on trade was an effort to isolate Cuba's communist government.

One legacy of the embargo is the large number of old American cars on the streets of Cuba. After 1961, Cubans could no longer import American cars. Some of these pre-revolutionary cars have more than a million miles on them, or about 1.6 million kilometers.

Cubans show incredible creativity in keeping these old cars running. Raul, who only gave his first name, is a taxi driver in Havana.

"This car is a 1953 Chevrolet. It is the only one in the family. It came from my grandfather, to my father, and then to me. Except for the transmission, everything else is original.

The Kennedy-era embargo is still in effect. Over the past year, the Obama administration has eased some parts of the embargo. Relations between the U.S. and Cuba have improved. The U.S. Embassy in Cuba reopened after 54 years, and Cuba has reopened its embassy in Washington, D.C.

Americans can now legally travel to Cuba for 12 different types of "people-to-people" exchanges. However, a trip to an all-inclusive beach resort is still illegal under American law.

"What surprised me was that it was really as beautiful as all those clichéd photos that you in travel brochures—lots of beautiful old cars and the buildings in the old town were gorgeous."

But it can be difficult for Americans to meet with ordinary Cubans on organized tours.

"The main drawback was that I didn't spend any time with the locals. I only got to interact with the tour guides."

Scenes of a more open Cuba can be seen on the streets of Havana. The American flag is a common sight – on T-shirts, hanging from balconies, flying on top of taxis. Such displays seemed impossible just a few years ago.

In the winter, waves from the Caribbean crash over Havana's sea wall, flooding the Malecón. The Malecón is a famous road that runs along Havana's north coast. Every day at sunset, thousands of Cubans gather here to chat, fish, swim, and play music. 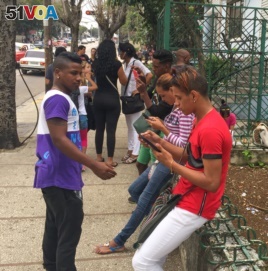 In the past few months, wireless hotspots have begun to appear in Havana. Access costs about $3/hour.

These days, you can see young people on the Malecón with smartphones using wireless Internet. Until last summer, the Internet was only available in a few universities and luxury hotels.

Access to the wireless zone costs about $3 an hour. That is a lot of money in a place where the average state salary is around $25 per month. There are now about 30 public wireless "hotspots" in Havana. Slowly but surely, Cubans are connecting online.

Young Cubans are eager to learn English. But there are not enough qualified English teachers on the island. Some of the best English teachers go to work in tourism and private restaurants, where they can make more money. English also allows Cubans to make friends and contacts outside of the Spanish-speaking world.

Juan Carlos Dominguez is the head of the English Department of a medical school in Havana. He says Cubans prefer to learn American English.

"We are neighbors...very close, 90 miles away only. We have some kind of identification. You can see on the streets, on the cars, people on the streets with American flags. We respect that."

A flood of Americans

The number of Americans visiting Cuba has risen sharply in the past year. Havana no longer has enough hotel rooms to keep up with demand. The government now allows Cubans to rent their homes to travelers.

Recent developments will send even more Americans to Cuba. Americans no longer have to apply for a license from the U.S. government before coming to Cuba. Regular commercial flights from the United States are expected to start this year.

Some people are worried that a flood of American tourists will hurt Cuba's unique culture. They worry that Old Havana will become like a Disney theme park. Will Cuba remain one of the few places in the world without a Starbucks or a McDonald's?

Juan Carlos Dominguez is not worried about American tourism. He says Cubans have a strong sense of cultural identity, or "Cubanismo."

"If Americans are permitted to come to Cuba as tourists, it could be great... We are going to share with you what we have...The future is bright."

The upcoming U.S. presidential election could have a major impact on U.S.-Cuba relations.

Democratic candidates Hillary Clinton and Bernie Sanders have said that they support lifting the embargo.

Two Republican presidential candidates have family ties to Cuba. Ted Cruz is the son of a Cuban father and an Anglo mother. Marco Rubio was born to Cuban immigrants in Miami. Both candidates have criticized President Barack Obama's move to normalize relations with Cuba.

Adam Brock reported this story for VOA Learning English on a recent trip to Havana, Cuba.

fedora – n. a type of soft hat for men that has a wide brim

rusty – adj. to be covered with a reddish substance that forms on iron or some other metal

crumbling – adj. in the process of breaking down or collapsing

cobblestone – n. a round stone that is used in paving streets

silo – n. an underground structure that is used for storing and firing a missile

thermonuclear – adj. of or relating to the changes in the nucleus of atoms that happen at extremely high temperatures

embargo – n. a government order that limits trade in some way

legacy – n. an effect of something that happened in the past

balcony – n. a raised platform that is connected to the side of a building and surrounded by a low wall or railing

clichéd –adj. something that is so commonly used in books, stories, etc., that it is no longer effective