Update Required To play the media you will need to either update your browser to a recent version or update your Flash plugin.
By John Russell
05 March 2020


The 1997 film Titanic is one of the most popular movies ever made. It won many film awards and was one of the highest-grossing films in movie history.

The film is a love story set against the sinking of the famous ship in 1912. It has many memorable scenes. Some of them can teach you important ideas about English grammar. 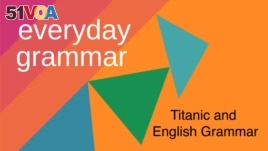 Today, we will explore one short scene from "Titanic" to teach you about tag questions and polite forms of speaking.

Today, we will explore one short scene to teach you about tag questions and polite forms of speaking. A tag question is a short question added to a statement.

In our scene, Jack, played by actor Leonardo DiCaprio, eats dinner with a group of rich people. DiCaprio does not come from a wealthy background – just the opposite, in fact. He does not have a home.

A wealthy woman asks Jack a difficult question. She asks if he enjoys his homeless life.

You can hear the tense silence after her question.

"And you find that sort of rootless existence appealing, do you?"

We will begin with the woman's question.

The woman's question is a kind of tag question.

First, she makes a statement:

"And you find that sort of rootless existence appealing"

Notice that the main verb is find.

The woman follows the statement with a tag question:

This is just one form that a tag question can take. If you want to learn more about different kinds of tag questions, you can read the story on our website, 51voa.com.

Now let's continue with the scene.

Think about DiCaprio's response to the woman's question.

The order of DiCaprio's words is important.

DiCaprio begins with the word well. Well is a common word that has many uses. Speakers often use well when giving an explanation.

DiCaprio then says yes, a term of agreement.

The next word is ma'am.

Ma'am is a polite term. Americans generally use it to speak to a woman who they do not know.

The Online Etymology Dictionary notes that in the United States, speakers generally use ma'am in answers - after the word yes or the word no.

In other words, you are more likely to hear Americans say yes, ma'am, or no, ma'am. Americans do not use the term ma'am along with a woman's name.

DiCaprio uses the words well, yes, ma'am ... to show politeness, and to show that an explanation is coming.

DiCaprio could have responded in a different, more direct way, as in:

"And you find that sort of rootless existence appealing, do you?"

Such a statement would have been a little too strong. That is why DiCaprio did not say it.

The point of this story is to show you that you can learn about culture and grammar by watching films or television shows. Even short clips can give you a lot of information.

When watching these films or shows, try asking yourself some questions. Why do the speakers say the things they do? Could they change the way they say their lines? These can be difficult questions to answer, but you will learn a lot by thinking about them.

A word of advice: It helps if you choose a clip from something that you like – perhaps a film or a show that you have seen before.

grossing – adj. used especially to describe a total amount of money that exists before anything (such as taxes or expenses) is taken away

memorable – adj. very good or interesting and worth remembering

scene –n. a part of a play, movie, story, etc., in which a particular action or activity occurs