'To Have a Monkey on Your Back' Is No Laughing Matter

Update Required To play the media you will need to either update your browser to a recent version or update your Flash plugin.
By Anna Matteo
12 November 2022

Today we talk about an expression, or idiom, involving an animal – a monkey to be exact.

Monkeys are intelligent animals, and they often do funny things. So, the English language has some monkey expressions that describe a fun situation. 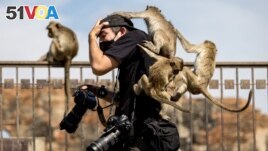 For example, to monkey around means to do things that are not useful or serious. And if something is more fun than a barrel of monkeys, it is very fun!

But what if you had to carry a monkey around with you every minute of every day ... on your back? That may not be so fun.

And that brings us to today's expression – to have a monkey on your back.

If you have a monkey on your back, you have a problem that cannot be easily solved. And you possibly have had that problem for a long time.

To have a monkey on your back can also mean to carry a great emotional weight. This weight comes from a bad decision or perhaps a feeling that you have done something wrong.

But the expression is used in more situations than that.

It is often used to describe a serious problem, worry, or concern that makes life difficult or unpleasant. Sometimes we use this idiom to describe a situation that is not our fault. It could be a hardship or condition from which we suffer.

Here are some examples.

A man grew up in extreme poverty. For a time, it was a monkey on his back. But getting a good education was the first step to getting the monkey off his back.

If a woman has a gambling, alcohol, or drug addiction, we could say she has a monkey on her back. It could last for many years or even a lifetime. However, if she could solve or end the problem, we could say she finally got the monkey off her back!

There is another expression that also means having a monkey on your back.

That expression is a millstone around someone's neck.

A millstone is a very large, heavy stone used for grinding things such as grain or corn. It crushes things easily. So, we also use the word millstone to describe a serious responsibility, problem, or concern.

barrel -n. a round bulging container that is longer than it is wide and has flat ends

addiction -n. a strong inclination to do, use, or indulge in something repeatedly