Today’s Teens in No Hurry to Start Driving

Update Required To play the media you will need to either update your browser to a recent version or update your Flash plugin.
By Ashley Thompson
10 August 2021


The legal age to drive a car in the United States is 16. Getting a driver's license on the day you turn 16 has long been a major life event for many young people in America.

But interest in driving among today's teenagers has dropped sharply over the past 35 years. 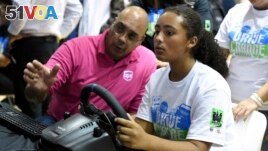 Those numbers come from the U.S. Federal Highway Administration.

This drop in interest in driving began with the millennial generation and has continued with Generation Z -- people born between 1997 and 2012.

Young people say they have many reasons for delaying or avoiding getting a driver's license. Some choose more environmentally friendly transportation choices. Others find driving to be stressful. And some simply do not care about cars at all.

Celeste Robinson is a high school student who lives in Boston, Massachusetts. She depends on friends with cars or public transportation to get around. She describes herself as a worried person and does not like to drive.

"I've tried it and it just feels very hard," Robinson told The Associated Press. "And I do love public transportation, so I plan things very much in advance and make sure I can get a train there."

Sixteen-year-old Kat Wilson is from New Jersey. Her father races cars at local competitions. But she has no interest in driving.

"I hate cars, I don't trust people driving them, especially in New Jersey," Wilson said. "I see a lot of accidents, and it's scary."

Carmakers want to make their vehicles more appealing to young people like Wilson and Robinson. They seek to make cars more interesting to a generation raised on technology.

Mark Rushbrook is global director of Ford Performance Motorsports. "A big screen" is what today's teen drivers want, he said.

"I think what is important to them is staying connected in a safe way," Rushbrook said. "The vehicle is an extension of their iPhone or their screen device, they want to stay connected and bring their music and everything else with them into the car."

Mark Reuss is president of General Motors. He said he believes there is still a market for young people who care about more than just their music and connectivity.

"You still have to deliver connectivity in something people love to look at and be seen in," he said. "That generation has not been lost. They still want a great looking car..."

He added, "There's lots of different ways to make cars appealing and that doesn't go away."

Twenty-year-old Cole Kleis attends Colorado State University, where he is studying automotive industry management. He took his first job at a car dealership at age 12 cleaning cars and helping in the parts department.

Kleis was given more responsibility over the years. He used his time to learn as much about cars as he could. In his free time, he has been fixing a 1938 car that his great-grandparents once owned. His goal is to one day own a car dealership.

Those in the automobile industry aim to not only identify car fans like Kleis, but also build cars that make other young people more interested in getting their license.

NASCAR driver Ryan Newman is a self-described "car guy." He has a huge building where he keeps his costly, rare vehicles. He learns everything he can about his cars, repairs them back into drivable condition, and knows exactly how they operate.

Newman believes today's young people can learn to love cars the way he does if adults just show them how.

"Get them involved, cars aren't at their fingertips in real life," Newman said. "God gave us our senses to go out and enjoy them and just by enjoying them on a video game is not the right way to do it."

What is the legal driving age in your country? Is learning to drive becoming less common among young people where you live? Let us know in the comments section!

license -- n. an official document, card, etc., that gives you permission to do, use, or have something

stressful -- adj. full of or causing stress : making you feel worried or anxious

(in) advance -- n. before something happens

management -- n. the act or skill of controlling and making decisions about a business, department, sports team, etc.

dealership -- n. a business that sells a specified kind of product

at your fingertips - idiom. easily available : easy to find or use