In most cases, the choice is clear. A student applying to a school learns which test the program requires. However, some programs or universities will accept scores from any of the international tests of English. Then, a student may choose which test to take.

The Educational Testing Service, ETS, in Princeton, New Jersey, develops and administers both the TOEFL and the TOEIC. It says the TOEIC measures the everyday English skills of people working in an international environment. 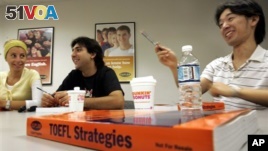 The TOEIC test started in the 1970s. The Japanese Ministry of International Trade and Industry asked ETS to develop a test for corporations to use. They wanted to know if non-native English speakers could carry out business in English.

The TOEIC is based on English used in the workplace. But the test does not require knowledge of special business words. The questions come from real situations like attending a company meeting.

The TOEFL tests English used in the classroom

There are several versions of the TOEFL.

Students take the Internet-based TOEFL, or TOEFL IBT, on a computer. Many U.S. universities require the TOEFL IBT for international student admissions.

Another TOEFL is the paper-based TOEFL, or TOEFL ITP. It is part of ETS's institutional testing program. TOEFL ITP is used within institutions for the purpose of placement or to evaluate progress of students. It is not accepted for entrance to universities.

For young English learners, there are two new TOEFL tests. The TOEFL Junior Test is for young people between 11 and 15 years old. And the TOEFL Primary Test is for those over the age of eight.

The IELTS has two forms. The Listening and Speaking sections are the same for both forms. In the Reading and Writing sections, however, there are two different tests.

The General IELTS uses topics and material from everyday books, newspapers and magazines.

A student's view of the tests

Triwik Kurniasari is a graduate student at an American university. She has taken both the IBT and ITP forms of the TOEFL and the IELTS.

She says the paper-based, or institutional test, the TOEFL ITP, is easier. The ITP is similar to the multiple-choice tests students usually take.

A major difference between the TOEFL IBT and the IELTS is in the Speaking section. On the IELTS, you have a face-to-face interview with a certified examiner. On the TOEFL IBT, you listen to a situation and record your response using a computer.

Ms. Kurniasari explains why the computer-based Speaking section of the TOEFL IBT was difficult for her.

"For the TOEFL IBT, it's more challenging because I have to speak with a computer, basically, and I didn't get to meet the real person who talked with me. I remember there were twenty or thirty people in the room. The hardest part is the speaking test because when I was about to speak, and the person next to me also started to speak, then somehow I lost concentration because I could hear what she or he said during the speaking test."

On the other hand, talking to a real person one-on-one during the IELTS was easier for Ms. Kurniasari.

"For the ILETS test, it requires a speaking test, but I get to meet the real person. It was just like a regular conversation so it's much more comfortable and easier for me because I got to meet the person face to face, so I think the TOEFL IBT is much more challenging."

Listening and responding to class discussions

"Sometimes they use idioms too, to share their ideas or thoughts and we really have to know the meaning of the idioms. I think the TOEFL IBT is much more difficult than IELTS, especially the class discussion and when the lecturer explains the lesson in a class."

Her advice is to focus and take notes as much as possible.

"We have to really concentrate, focus, of course we can take notes, but somehow it's just too fast, and somehow you cannot really memorize the things that they've said."

Prepare well in advance of the test

Triwik Kurniasari's strategy for success is to study, study and study.

"If you want to take any kind of test, make sure that you have enough time to prepare for it. I usually try to prepare myself at least two months prior to the test just to allow myself to get used to the test and to study for the test."

She also recommends using books rather than free online test materials. After getting a low score the first time she took the TOEFL IBT, she spent the money on study books for the tests.

"I decided to study harder and buy some books, even though they're expensive but since I wanted to get good scores... For me, books are much more effective than studying for instance, from samples on the Internet, because with the books I can go back and forth and take some notes."

To practice for the Listening sections of the tests, she says students should listen to native speakers from more than one country.

Finally, our student's last word of advice is one that your mother would probably give you – be rested and well fed.

"During the test you need to focus and concentrate. Before the test, make sure you get a good sleep. Make sure that you have breakfast!"

And that's the Education Report.

section – n. one of the parts that form something

response – n. something that is said or written as a reply to something

respond – v. to say or write something as an answer to a question or request

monologue – n. a long speech given by a character in a story, movie, play, etc., or by a performer

concentrate – v. to think about something; to give your attention to the thing you are doing, reading, etc.

Now it's your turn. Have you taken any of the standardized English tests? What is your advice for test takers?