Update Required To play the media you will need to either update your browser to a recent version or update your Flash plugin.
By Dan Friedell
06 August 2021


This year's Olympic Games in Tokyo are different from all others that came before.

First, the Games were delayed by one year due to the COVID-19 pandemic. Second, just before the start of the Olympics, it was announced that fans would not be permitted in most event areas.

Olympic competitions are being shown on television, of course. But the biggest interest for the Games seems to be happening online.

Many people are watching events on their computers or mobile devices. More than 100 million people visited Olympic websites or used apps through the first week of the Games.

The broadcaster that shows the Olympics in the United States is NBC. It reports that people had watched more than 2.5 billion minutes of the Games on the internet or mobile devices. That number is 77 percent higher than during the 2018 Pyeongchang Winter Games. 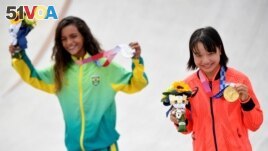 Rayssa Leal and Momiji Nishiya of Japan pose with their skateboarding medals.

While some athletes at the Tokyo Games shot to popularity by winning medals, others became stars on social media. Many competitors using services like TikTok and Instagram have greatly expanded their fan base.

One example is Margie Didal, a skateboarder from the Philippines. She finished seventh in her event. But she has 1.5 million followers on TikTok. Some of her short videos have been seen by millions. Two videos from Tokyo got more than 15 million views. One of them shows her dancing with Rayssa Leal of Brazil, who won a silver medal. Leal herself has 6 million followers on Instagram.

Another athlete who did not shine in competition but got wide attention on social media is Ilona Maher of the U.S. women's rugby team. Maher is big and strong – weighing about 90 kilograms and standing about 1.8 meters tall. She uses the hashtag "beastbeautybrains" with her social media posts. She says she wants to let larger girls know "you can be so many things, a beast on the rugby field, a beauty whenever, and have as much brains as the smartest person out there."

One athlete who is getting popular is not even an Olympian yet. Silvia Solymosyova is a synchronized swimmer from Slovakia. She has published videos on TikTok in English in an effort to get attention in the U.S. So far she has gained over 1 million followers, mostly with videos showing her dancing underwater.

Jagger Eaton is a young American skateboarder. He has been competing since he was a boy. He is now 20. Eaton, who won a bronze medal in Tokyo, said he is "stoked" that so many people are now interested in skateboarding. He has about 500,000 followers between Instagram and TikTok.

Another American athlete, Erik Shoji, is getting attention for his videos that show off the food and atmosphere inside the Olympic village in Tokyo. Shoji is a volleyball player from Hawaii. He said the goal of his videos was to show his own experiences in the athlete's village and to help fans to learn more about the U.S. men's volleyball team.

In one video, Shoji documented an attempt to try out some Japanese food. Among the items were an egg roll, a shrimp dumpling, fried chicken and a "meat bun." In one opinion after his on-camera taste test, Shoji commented: "Pretty good, but needs some sauce."

Jenna Fryer wrote this story for the Associated Press. Dan Friedell adapted it for Learning English. Bryan Lynn was the editor.

Who are some of your favorite Olympic athletes to follow on social media? Tell us in the Comments Section and visit 51VOA.COM.

athlete –n. a person who is trained in or good at sports, games, or exercises that require physical skill and strength

medal –n. a piece of metal with designs and words on it given to honor a special event, a person or a victory in a competition

beast –n. a wild animal that is large, dangerous, or unusual; used to describe a strong or powerful person

synchronized swimming –n. a sport in which swimmers move together in patterns to music

dumpling –n. a piece of food that is wrapped in dough and cooked

sauce –n. a thick liquid that is eaten with or on food to add flavor to it