Tokyo Olympics to Release Plan for Games in Pandemic

Update Required To play the media you will need to either update your browser to a recent version or update your Flash plugin.
By Ashley Thompson
27 January 2021


The International Olympic Committee (IOC) and Japanese organizers are set to publish a rulebook for the upcoming Tokyo Olympic Games.

The book will be released next week. It will explain how 15,400 Olympic and Paralympic sports competitors and tens of thousands of others will try to safely enter Japan when the Olympics begin in six months. 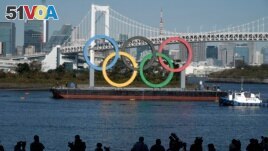 FILE - The Olympic Rings is put back up after they were taken down for repairs ahead of the postponed Tokyo 2020 Olympics in the Odaiba section of Tokyo, Tuesday, Dec. 1, 2020. (AP Photo/Eugene Hoshiko)

Local organizers and the IOC are hoping to push back against recent media reports claiming the Olympics will be canceled, as Tokyo and much of Japan are still under a COVID-19 state of emergency.

The release of the plan is set to take place at IOC headquarters in Switzerland on February 4. Tokyo organizers are to present the plan the following day.

Lucia Montanarella is head of IOC media operations. She said the organizers created four different possible situations. One includes continued travel restrictions, for example. Another imagines the pandemic is nearly over.

Montanarella added, "The present scenario is very much like one of those that we'd created, with the pandemic still among us, and some countries being able to contain it, some not."

The book will explain plans for creating safe bubbles in Tokyo. It will be updated with changing rules and requirements as the opening date gets closer.

The Olympic Games are set to start July 23. The Paralympics are to open one month later, on August 24.

Athletes and those traveling to Japan -- coaches, judges, members of the media -- are likely to face some self-quarantine periods before they leave their home country. This will be followed by tests at the airport, tests after arriving in Japan, and additional testing for those staying in the Athletes Village.

Is there support for the Games?

A major unanswered question involves fans. How many fans will be permitted to watch events? Also, will only fans already in Japan be included?

Olympic Minister Seiko Hashimoto said Tuesday that those decisions will be announced "by the spring." Fewer fans means more costs for Japan. The local organizing committee expected to receive $800 million from ticket sales. Any drop in sales will have to be made up by Japanese government groups.

Craig Spence is a spokesman for the International Paralympic Committee. He said organizers must get the support of the Japanese public. Recent opinion studies show that 80 percent of Japanese people questioned think the Olympics should be canceled or postponed.

IOC President Thomas Bach is pushing for everyone involved in the Olympics to be vaccinated. But the World Health Organization said earlier this week that Olympic athletes should not be placed ahead of healthcare workers, old people and those at risk of getting severely ill.

Japan has recorded more than 5,000 deaths connected to COVID-19. Its healthcare system is under pressure with deaths and new cases rising. A vaccination program is expected to start next month. But vaccines will not be available to the general public until later in spring.

The president of the Japan Medical Association, Dr. Toshio Nakagawa, issued a warning last week when asked about the Olympics.

"Many people will come from abroad, and it's a huge number, even with just the athletes," Nakagawa said. "In this situation, if coronavirus patients appear among them as a collapse of the medical system is happening and is spreading, it will not be possible to accept them."

bubble - n. a usually small group of people who regularly interact closely with one another but with few or no others in order to reduce spread of a disease

abroad - adv. in or to a foreign country