Update Required To play the media you will need to either update your browser to a recent version or update your Flash plugin.
By Dan Friedell
28 September, 2016

Elizabeth Murphy and Ryan Barclay were posing for wedding photos along a path in New York City's Central Park.

It was already an exciting day in their lives. 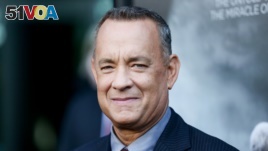 And then, actor Tom Hanks showed up. He was exercising in the park. He was wearing shorts, a t-shirt and a sweatshirt.

The couple was surprised when he walked up and introduced himself. He said, "Hi, I'm Tom Hanks."

Elizabeth asked, "Can we get a photo with you?"

Video and photos from the encounter are being shared on social media this week.

Hanks is one of the most popular movie actors of all time. He is known for playing Forrest Gump; a stranded traveler on a small island in "Cast Away"; and Woody the cowboy in the "Toy Story" animated films.

His current film, "Sully," is the top new movie in the U.S. It tells the true story of pilot who safely landed a commercial airplane on the Hudson River near New York City after both engines failed.

Hanks posed with the couple, kissed the bride on the hand and cheek, and even took a selfie with his own phone.

The meeting took just over a minute.

One person in the group invited Hanks to the wedding, saying, "We have extra seats." But the actor declined, saying, "I think I have a dinner engagement."

On Facebook, many people praised Hanks for being so friendly.

One person wrote: "Such a gem of a human being."

Others joked about Hanks' many movie roles.

One man wrote: "This guy is amazing! I saw on TV that he landed a plane on the Hudson River and now he's crashing wedding pictures, pretty cool guy."

One woman posted a photo she took with Hanks at a Los Angeles restaurant. She wrote: "Tom Hanks is such a nice guy!"

What do you think of Tom Hanks' surprise? We want to know. Write to us in the Comments Section or on 51VOA.COM.

encounter – n. a meeting that is not planned or expected

strand – v. to cause (something, such as a boat or a sea animal) to become stuck on land — usually used as (be) stranded

animated – adj. produced by the creation of a series of drawings, pictures, etc., that are shown quickly one after another : produced through the process of animation

engagement – n. a promise to meet or be present at a particular place and time

crash – v. to go to (a party) without being invited