Too Much Gaming is a Pain in the Neck

Update Required To play the media you will need to either update your browser to a recent version or update your Flash plugin.
By Anna Matteo
24 March, 2015

Most children have heard their parents at one time or another yell "sit up straight!" or "don't slouch!"

In the past, this was usually heard at the dinner table as children ate dinner. But these days, it is also heard around another activity – video games.

Ten-year old Owaish Batliwala, from Mumbai, India, admits he spends three to four hours each day playing games on his tablet computer. His mother Mehzabin became concerned when her son started saying that his neck hurt.

This chart shows the stress put on the neck and spine as a result of hunching over a smartphone. (Courtesy Dr. Ken Hansraj M.D.)

She said, "My son started having neck problems around June or July. The pain slowly spread to his hand and his back. He plays for hours on the iPad and mobile phone. This is what has caused the problem."

Sadia Vanjara is a physical therapist. She says the number of young children with chronic pain in their necks, arms and shoulders is on the rise. Dr. Vanjara says the pain is not from aging, accidents or disease. It is from poor posture, or body position, while playing video games.

19-year old student Nida Jameel says she feels pain in the finger which holds the weight of her smartphone most of the day.

She says she uses her smartphone 24/7. This means 24 hours a day, seven days a week, or all the time.

"As I use phone 24/7 (all day) like, so probably yeah, it was because of the phone, continuous usage and Snapchat, Whatsapp, more and more you know social media coming, so like phone is the center of everything."

Dr. Vanjara says the best treatments for the pain are daily exercises. 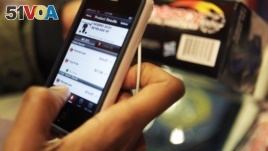 Doctors say that holding your smartphone in a bad position could lead to problems with your hands and fingers.(2011 FILE PHOTO)

"And start stretching it in all the possible directions that you can."

Correct posture can help prevent pain. Dr. Vanjara teaches children how to hold their gadgets correctly. She tells a patient to hold the gadget in front of the face. She says that bending the head down to look at the device, strains the neck and creates an unhealthy bend to the back.

Sadia Vanjara predicts we will see not only physical but psychological and emotional problems resulting from overuse of gadgets.

Experts advise taking breaks from using a computer or other device often. Stand up. Stretch your legs, back, shoulders and arms. And when your work or school work is done, unplug and exercise.

Are you experiencing physical difficulty from too much use of your gadgets? Let us know in the comments section.

slouch – v. to walk, sit, or stand lazily with your head and shoulders bent forward

physical therapist– n. someone who treats a disease or injury of the muscles or joints with massage, exercises, heat, etc.

strain – v. to injure (a body part or muscle) by too much tension, use or effort

unplug – v. to disconnect (something, such as a lamp or television) from an electrical source or another device by removing its plug