Update Required To play the media you will need to either update your browser to a recent version or update your Flash plugin.
By Mario Ritter Jr.
07 June 2021


Top finance officials from the G7 industrialized nations agreed on Saturday to the idea of a worldwide minimum tax for international corporations.

Observers say the agreement signals coming changes to laws for taxing businesses across borders in the future. However, many details have yet to be worked out before a larger group of nations, the G20, is likely to give its support to the idea. G20 officials are expected to meet next month. 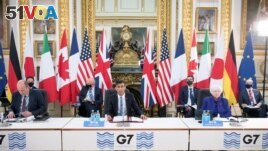 FILE - Britain's Chancellor of the Exchequer Rishi Sunak speaks at a meeting of finance ministers from across the G7 nations ahead of the G7 leaders' summit, at Lancaster House in London, Britain June 4, 2021. (Stefan Rousseau/PA Wire/Pool via REUTERS)

Here are some of the details that have been agreed on:

What countries will be affected?

The G7 agreement of having a worldwide tax rate for international corporations of at least 15 percent now faces another test. An online meeting of the Organization for Economic Cooperation and Development is planned for June 30 to July 1. The OECD is based in Paris.

In that meeting, a group of 139 countries will negotiate the idea with the aim of reaching agreement on additional details. Any agreement these nations reach will be studied by a meeting of G20 finance ministers who are meeting in July. Observers say, if the G20 countries agree to the minimum tax, then it would likely become a worldwide rule.

How does the tax work?

The idea of a worldwide minimum tax is that it gives countries the ability to tax company profits even if they are reported in countries with low tax rates. The G7 finance officials want the minimum tax to be used for individual countries. They do not appear to support using an average rate for all countries in which a business might operate.

Here is an example of how the tax might work. If a U.S. company reports a profit in the British Virgin Islands, which has no corporate tax, U.S. tax officials could still tax that company's profits at a rate of 15 percent.

Details to be worked out

G7 ministers are also discussing how to tax the biggest international companies like Apple and Google. Those details have not been made final.

However, some industries, such as the mining industry, are likely to be exempt because of the way they pay governments and make profits. Also, countries such as China want to protect low-tax, special economic areas to support investment and development.

The OECD estimated in October that a worldwide minimum tax would provide $100 billion dollars in additional tax income each year for governments around the world. That is about four percent of all income tax collected around the world in one year. While that is a lot of money, it is a small amount when compared to the trillions of dollars large countries have spent because of the COVID-19 health crisis.

minimum –n. the lowest number or amount that is possible or that is permitted