Update Required To play the media you will need to either update your browser to a recent version or update your Flash plugin.
By VOA
11 June, 2015


United States lawmakers met this week with the top inspector for the federal agency that protects America's flying public.

Serious questions are being raised about U.S. air safety and whether the Transportation Security Administration is meeting its stated goal of protecting the flying public. The TSA was created 14 years ago, shortly after the September 11 terrorist attacks against the United States. 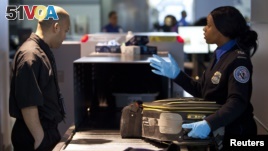 On Tuesday, Homeland Security Inspector General John Roth spoke to a Senate committee about the agency and its work.

"We remain deeply concerned about its (TSA's ability) to execute its important mission."

Mr. Roth said his team uncovered what he called "significant vulnerabilities" in the TSA's job of performing safety inspections at airports.

"TSA cannot afford to miss a single genuine threat without potentially catastrophic consequences. Yet a terrorist only needs to get it right once."

Reports that security problems remain have shocked lawmakers like Senator Ron Johnson of Wisconsin. He noted the huge number of safety screenings required.

"TSA screens nearly 2 million passengers each day, nearly 660 million every year. That is an enormous challenge and task."

Some Americans have noted problems they have witnessed, such as a seeming lack of attention to a list of passengers approved for speedy TSA screening at U.S. airports. Rebecca Roering supervises the TSA office at Minneapolis-St. Paul International Airport in Minnesota. She criticized the agency for adding so many names to the list.

"TSA is handing out pre-checked status like Halloween candy in an effort to expedite passengers as quickly as possible, despite self-admitted security gaps that are being created by the process."

"If a terrorist group puts thought into it, it is relatively easy to sneak small bombs into jets in order to blow them up at high altitude."

Two air travelers near Washington say they are worried.

"I mean, it's horrifying. There is no other way to feel about it."

"I'm appalled, frankly. I think there was such a panic after 9/11 that we just hired a lot of people because we could. And I'm not sure we did our job in terms of vetting them to begin with."

Delaware Senator Tom Carper says the TSA must do a better job.

"We should be focused on perfection. We will never get there, but that should be our goal."

Recent terrorist plots against U.S. aviation have been stopped. But if things do not change at TSA, lawmakers worry it is only an issue of time before one of those plots succeeds.

simulate(d) – v. made to look or feel like something

catastrophic – adj. relating to a disaster

air marshal – n. a federal agent who travels on flights to stop or defeat hostile acts