Some of 2016’s Top News Stories Were Big Surprises

Update Required To play the media you will need to either update your browser to a recent version or update your Flash plugin.
By Bryan Lynn
29 December, 2016


Today we look back at some of the biggest news stories of 2016. With stories of conflict, tension and peace, it was a "complicated" year.

First on many people's list was the result of the U.S. presidential election.

On Election Day, the New York Time's reported that Democratic candidate Hillary Clinton had an 85 percent chance of winning the presidency.

But it was Republican Donald Trump who won. It was one of the biggest political upsets in United States history. Trump will become America's 45th president on January 20.

The billionaire businessman and television star was not even expected to win the Republican Party nomination. At the beginning of the year, political experts expected one of his many Republican opponents to become the party's nominee. But Trump won the most Republican primaries.

Trump has promised to bring back factory jobs lost to other nations. During his campaign, he promised to "make America great again."

Here is how Trump explained his victory over Clinton: "As I've said from the beginning, ours was not a campaign, but rather an incredible and great movement made up of millions of hard-working men and women who love their country and want a better, brighter future for themselves and for their families."

The presidential campaign was divisive. Trump called his opponent "crooked Hillary." Clinton described Trump as being "temperamentally unfit and totally unqualified to be President.''

Clinton won the national popular vote by more than 2 million votes. But she lost several industrial states that Barack Obama, also a Democrat, won in 2008 and in 2012. Those losses hurt her; she was not able to receive enough electoral votes in the Electoral College.

Members of the Electoral College base their votes on the winner in each of America's 50 states and the District of Columbia. Trump gained more than the 270 electoral votes needed to be the winner.

President Barack Obama campaigned for Clinton. After the election, he told National Public Radio (NPR) that the Democratic Party failed "to give people in rural areas" a sense "day-to-day that we're fighting for them."

Surprise result in Vote on EU Membership in Britain

Another political surprise took place with Britain's referendum on whether the nation would remain in the European Union. The movement was known as "Brexit." 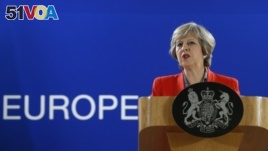 British Prime Minister Teresa May has promised to go forward with Brexit.

London, Scotland and Northern Ireland voted to remain in the European Union. But, other parts of Britain voted in favor of Brexit. Many supporters of Brexit were shocked -- as were opponents of the move -- when they won the vote on June 23.

British Prime Minister David Cameron, who supported remaining in the E.U., resigned as a result of the vote. That cleared the way for Britain's second woman Prime Minister Theresa May. She has promised to start the process of leaving the group. It will require new agreements on everything from trade to security.

British money, the pound, lost exchange value against other currencies after the vote.

The deadliest terrorist attack took place in France when a man drove a truck through a celebrating crowd on Bastille Day, July 14, in the coastal city of Nice. Eighty-six people were killed and more than 400 were injured.

The driver was a Tunisian man living in Nice. He was shot and killed by police. French President Francois Hollande promised new security efforts. "Nothing will make us give way in the fight against terrorism," he said.

Germany faced a similar attack days before the Christmas holiday. A man drove a truck into a crowd at a Christmas market in Berlin. Twelve people died and injuring many more.

In July, attackers killed 41 people and wounded about 240 more with gunfire and explosives at Istanbul's main airport in Turkey.

Earlier in the year, suicide attackers killed 32 people in bombings at the city's airport and a subway station in Brussels, Belgium. Islamic State claimed responsibility for the attacks.

In the U.S., a series of shootings brought attention once again to gun violence.

The deadliest mass shooting in modern U.S. history happened in June at a gay nightclub in Orlando, Florida.

The gunman, Omar Mateen, killed 49 people over three hours before dying in a shootout with police. Many more people were injured. During the incident, police said Mateen called himself an Islamic soldier and promised loyalty to the Islamic State.

In July, a series of incidents involving police shootings and attacks on police made news.

In Baton Rouge, Louisiana, a white police officer shot and killed Alton Sterling, a black man, during a struggle outside a store. The incident was captured on video and widely watched on social media.

This led to large protests, violence and mass arrests. About two weeks later, a gunman in Baton Rouge killed three police officers and wounded three others.

Soon after the shooting of Sterling, Philando Castile was shot and killed by a police officer during a traffic stop in Minnesota. Part of the incident was captured on video by Castile's girlfriend.

Then, a peaceful demonstration against those police shootings turned deadly when five police officers were shot and killed in Dallas, Texas.

The gunman, who was black, told police he was targeting white officers. He was killed with an explosive device on a law enforcement robot.

President Barack Obama and other officials attended a memorial service in Dallas for the officers killed.

The U.S. Supreme Court goes to work with only eight justices

United States Supreme Court Justice Antonin Scalia died suddenly in February. President Obama nominated Merrick Garland, a U.S. Court of Appeals judge, to fill the nine-member court. However, Republicans in the Senate did not want Obama to appoint a replacement for Scalia, who was a strong conservative voice on the court.

The Senate refused to consider the nomination, saying it was too close to the end of the president's term. The refusal angered Senate Democrats and left the Supreme Court with eight instead of nine justices.

The conflict in Syria remained intense during 2016. Forces loyal to Syrian President Bashar al Assad regained control of rebel areas of the city of Aleppo, with help from Russia. The cost was a humanitarian crisis made worse by many failed attempts at a ceasefire in the city.

Only one country has tested nuclear devices in the 21st century. In 2016, North Korea carried out two nuclear tests: first in January and then in September. In both cases, the United Nations Security Council answered by placing strong sanctions on the country. The sanctions included trade restrictions.

In response to missile threats, South Korea agreed to the deployment of the U.S. THAAD missile defense system on its territory. The move led to increased tensions with China.

For generations of Americans, the idea of a U.S. president visiting the island of Cuba seemed impossible. No American president had visited the country since Communist revolutionaries led by Fidel Castro took over in 1959. 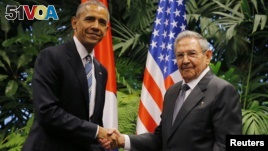 But in March, President Barack Obama made a historic to Cuba. His visit came seven months after the U.S. reopened its embassy in the capital city of Havana. The U.S. still has trade restriction on the country and denounces the island nation's human rights record.

In November, Cuban revolutionary leader Fidel Castro died at the age of 90. His passing could signal political change for Cuba. But his brother, Raul Castro, still remains in power. The younger Castro has ruled Cuba since 2008.

The Colombian government and the country's largest rebel group, the Revolutionary Armed Forces of Colombia, known as FARC, reached a peace deal this year. The agreement aimed to end more than 50 years of conflict that has claimed more than 220,000 lives.

However, the Colombian people voted against it in a referendum held in October. Critics, including former president Alvaro Uribe, said the deal gave amnesty to drug traffickers.

This week, Colombia's Congress approved a law giving amnesty to thousands of FARC guerillas guilty of minor crimes. The deal does not include fighters who have carried out war crimes or human rights violations. The law also extends to the country's military.

Both the Congress and Senate have passed the new agreement. It includes reforms and payments to victims. FARC will become a political party under the deal.

And those are some of the top news stories for 2016.

Bryan Lynn wrote the story on terrorism and U.S. gun violence with additional material from VOA News, the Associated Press and Reuters.

What did you think the biggest news story of 2016 was? What do you think was missed by the news media? Tell us in the comment section.

upset - n. occurrence in which a game or election is won by a person or team that had been expected to lose

primary - n. an election in which members of the same political party run against each other for the chance to be in a larger and more important election

unqualified - adj. not having the skills, knowledge, or experience needed to do a particular job

gay – adj. sexually attracted to someone of the same sex

amnesty –n. a decision to put aside punishment for a person or group