Update Required To play the media you will need to either update your browser to a recent version or update your Flash plugin.
By Bryan Lynn
26 December, 2018


During 2018, we reported on many inventions and new technologies aimed at making machines smarter. We also covered stories on how some technologies threaten user privacy.

There was a lot of news related to artificial intelligence, or AI, and machine learning. Among the stories were two dealing with direct competitions between humans and machines.

In one competition, machines that used AI performed better than human beings in a high-level reading test. Two natural language processing tools beat human results in the experiment. One of the tools was built by the American technology company Microsoft. The other was created by Chinese online seller Alibaba Group.

In another competition, a computer took on humans in live, public debates. The event demonstrated how AI-powered computers are increasingly being developed to think and sound like humans. 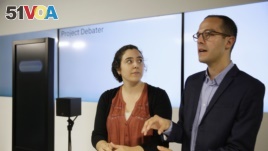 The organizer of the debates, U.S. technology company IBM, announced split results. It said a majority of those watching said they felt the machine had done more to improve their knowledge of the subject. But, the human got more praise for communicating her ideas.

This year, we also explored the many ways AI and machine learning are now being used. For example, some U.S. judges use machine learning systems to help them decide when, and for how long, criminals should be jailed. The system uses computers to examine data from thousands of court cases. The computer then predicts whether a defendant will commit a new crime or fail to return to court.

One fast-growing area of AI is facial recognition, which is increasingly being used for security purposes.

Recently, Atlanta's Hartsfield-Jackson airport became the first in the U.S. to permit passengers to use facial recognition technology to get on flights. A Chinese company showed off an AI system it developed to recognize individuals by body shape and walking movements. The system is already being used by Chinese police in Beijing and Shanghai.

In addition, machine learning was used during 2018 to predict results of the World Cup soccer competition. The technology also created artwork that sold for a large amount of money. And it is being used to help farmer save time and money, while reducing environment-harming chemicals. Other technology systems are being used to follow farm animals and wildlife to collect information on their activities.

Facebook received intense criticism this year. The company's chief Mark Zuckerberg was asked to testify before the U.S. Congress about a major leak of private user information. Zuckerberg admitted the company made mistakes that led to private data being shared with a British research company. Lawmakers demanded that the social media service take steps to protect user privacy and proposed legislation to prevent other incidents.

Google also faced questions about its privacy policies after an investigation by the Associated Press (AP). AP found that Google was continuing to collect location information on users, even when users had changed their privacy settings.

Google said users can stop the collection of all location markers at any time by turning off a specific privacy setting. But independent researchers told the AP that setting was not clearly identified by Google as being connected to location information.

After several accidents involving self-driving test vehicles, we examined ethical questions about the technology. An expert on the subject, Nicholas Evans, told VOA that he is studying ways to get driverless vehicles to make ethical decisions. In many driving situations, vehicles will be expected to quickly consider levels of risk before deciding how to act.

A new study found that some driver assistance systems fail to perform some actions in tests. The study was carried out by the American Automobile Association of America. Part of the study found that about 40 percent of people questioned believed the driver assist systems could drive a car by themselves. The organization warned of the dangers of such misinformation.

In Sweden, a new technology was developed to create the world's first operating electrified road. The system is designed to charge an electric vehicle's battery as it travels.

And in Germany, officials celebrated the launch of the world's first operating hydrogen-powered trains. The new train model is part of efforts in Europe and other places to move away from polluting diesel trains.

What were your favorite technology stories from 2018? Write to us in the Comments section, and visit 51VOA.COM.

leak – n. incident in which sensitive or private data is stolen or released