Update Required To play the media you will need to either update your browser to a recent version or update your Flash plugin.
By Dan Friedell
06 June, 2017

A tornado can be a dangerous weather event. It is often described as "violent" and "destructive."

Tornadoes are known for their strong, fast-moving winds. They can kill people and destroy buildings.

Sometimes the winds create what is called a funnel cloud. The cloud moves quickly along the ground, striking down and pushing away whatever it hits. 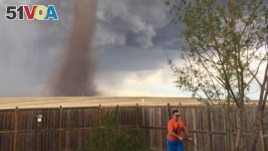 Theunis Wessels mows his lawn in Alberta, Canada, with a tornado in the distance.

When a tornado is nearby, people are advised to go inside a building and down to the basement or hide in the strongest part of the structure.

But recently, one man thought he could still get some outdoor work done even when a tornado was nearby.

Theunis Wessels of Alberta, Canada would not get inside his home, even when his daughter asked him to.

Wessels said he had to cut the grass growing around his house because there were too many activities planned for the weekend.

So his wife, Cecilia, came outside to ask him to come in. He would not, so she took a photograph and shared it on Facebook.

Cecilia Wessels wrote "my beast mowing the lawn with a breeze in his hair."

The photo captured the imagination of many people on social media.

Some added words or pictures to her photo and posted the new version online.

One person wrote: "life in Canada summed up in one picture."

On her own Facebook post, Cecilia Wessels described her husband as "the Chuck Norris of lawn mowers."

Norris is famous for his action movies. His long career was helped in 2005 when people started writing funny "Chuck Norris Facts."

The funny "facts" have him doing impossible things. One of them was "Chuck Norris beat the sun in a staring contest."

Cecilia said she was not too worried about the tornado. She was just taking a photo to show her parents in South Africa.

That is when many people became concerned for Theunis Wessels' safety.

But Theunis said he knew about the bad weather, but the photo made the tornado seem much closer than it actually was.

Dan Friedell wrote this story for VOA Learning English based on information from the Canadian Press. George Grow was the editor.

What do you think of the photo of the man mowing the lawn with a tornado nearby? We want to know. Write to us in the Comments Section or on 51VOA.COM.

funnel – n. a device shaped like a hollow cone with a tube extending from the point, used to pour a liquid into a narrow opening

basement – n. the part of a building that is partly or completely below the ground
beast – n. an animal

mow the lawn – v. to cut grass with a machine or a sharp edge

to sum up – v. to describe or show the most important parts or qualities of someone or something in a simple way

stare – n. to look at someone or something for a long time often with your eyes wide open