Update Required To play the media you will need to either update your browser to a recent version or update your Flash plugin.
By Carolyn Nicander Mohr
23 December, 2015


Technology can bring magic to the Christmas season and some fun too! Internet users can find out if they are naughty or nice, follow Santa's journey, and play fun Christmas games.

People can make online videos with a personal Santa message in English, Spanish or French at Portable North Pole, or PNP. Santa will say the names of users, show photos and talk about the user's good behavior this year. 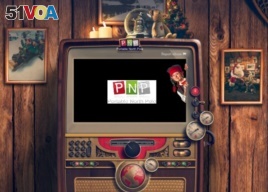 Go to the Portable North Pole website and sign up with an email address, Facebook or Google account. There will be questions to answer to make the video personal. Users can add a photo of the person to whom the video will be sent. They can also add a picture of themselves as senders of the video.

The PNP video can be shared through social media and email. It is free but you can also pay to put in additional photos, make a longer video or to download the video.

NORAD, the North American Aerospace Defense Command, follows Santa as he travels across the planet. It is the 60th anniversary of the Santa Tracker. It can be found on the NORAD website and free NORAD Santa apps.

The website is available in eight languages. It includes games, movies and other activities. Then, on Christmas Eve, visitors can watch as Santa makes his way around the world.

Google also follows Santa on Christmas Eve at the Google Santa Tracker website and through apps.

Visit Santa's Village, learn about holiday traditions around the world, play games, watch videos, and more, all on on the Google Santa Tracker website.

A call from Santa!

Parents can help their children behave with the app ‘A Call From Santa!' This app gives unlimited free calls from Santa.

Santa will praise a child for being nice or scold a naughty child. The app plays recorded voice messages from Santa. Children can also leave their Christmas wish list and a message for Santa.

A video shows how 'A Call from Santa!' works:

The free version of the app has advertisements. But users can pay a fee to remove the ads.

A Call from Santa! for iPhone

A Call from Santa! Android

The ElfYourself app permits users to see themselves as elves. They can also make dancing elf videos. After the app creates the dance video, it can be shared on social media or email.

ElfYourself is also free. But users can pay if they want additional dance videos.

ElfYourself for iPhone and iPad

How did Santa get so plump? By eating lots of sweets!

Hungry Santa is a game that lets users fill up Santa with sweets and treats. They can move Santa around so he can eat cookies, candy and other sugary foods. Santa does not seem interested in healthful choices.

The free app keeps score so users can compare their scores with others around the world. There is a Hungry Santa app for Android, iPhone and iPad.

Hungry Santa for iPhone and iPad

Have you ever used these fun tech tools at Christmas? Which are your favorites? Do you have any suggestions for fun ways to celebrate the holiday?

naughty - adj. behaving badly — used especially to describe a child who does not behave properly or obey a parent, teacher, etc.

personal - adj. belonging or relating to a particular person

aerospace - n. n industry that deals with travel in and above the Earth's atmosphere and with the production of vehicles used in such travel

tradition - n. a way of thinking, behaving, or doing something that has been used by the people in a particular group, family, society, etc., for a long time

scold - v. to speak in an angry or critical way to (someone who has done something wrong)

cookie - n. a sweet baked food that is usually small, flat, and round and is made from flour and sugar

candy - n. a sweet food made with sugar or chocolate