Trade Dispute between US, China Rises

Update Required To play the media you will need to either update your browser to a recent version or update your Flash plugin.
By Hai Do
15 June, 2018

China quickly answered with its own tariffs on American goods.

The moves increase the trade dispute between the world's two largest economies.

In a statement Friday morning, the president said the tariffs were necessary to prevent "unfair transfer of American technology and intellectual property to China."

The Office of the U.S. Trade Representative said the tariffs will start on July 6.

China's Commerce Ministry answered quickly to the U.S. taxes on Chinese imports. The ministry announced Friday that it will immediately add tariffs of "equal scale and equal strength" on U.S. products.

The ministry statement gave no details. But China had earlier released a list of $50 billion in U.S. products that would face tariffs, including beef, whiskey and soybeans. If tariffs are placed on those products, they would likely affect farmers and rural supporters of president Trump.

Trump has blamed the trade imbalance between the two countries for the loss of American jobs. In March, while signing an order calling for tariffs on China's imports, the president said "It is the largest deficit of any country in the history of our world."

China's trade surplus with the U.S. last year was about $375 billion. Trump said that with the increased tariffs he hopes to cut the trade deficit with China by $100 billion.

The tariffs were in response to complaints that China requires or pressures foreign companies to hand over technology. American officials say they have targeted products that might benefit from Chinese industrial policies. 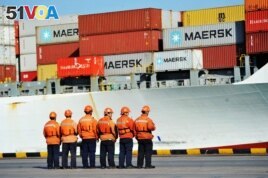 This photo taken on April 8, 2018 shows workers stand in line next to a container ship at a port in Qingdao in China's eastern Shandong province.

Thomas Donohue is president of the U.S. Chamber of Commerce. He said tariffs place "the cost of China's unfair trade practices squarely on the shoulders of American consumers, manufacturers, farmers, and ranchers."

Gary Cohn was formerly a top economic adviser for the president. At an event sponsored by The Washington Post, he added, "If you end up with a tariff battle, you will end up with price inflation, and you could end up with consumer debt."

The U.S. had earlier announced tariffs on steel and aluminum imports from Canada, Japan, Mexico and Europe. The announcement led major American allies to promise their own trade measures to answer the American import taxes.

Hai Do adapted this story for Learning English based on AP, Reuters and VOA news reports. Mario Ritter was the editor.

intellectual property –n. property such as inventions, research and media that carry rights for the owner to use, sell or gain from the property

scale –n. the size of something, especially in comparison to something else