Trade Dispute Could Hurt Sales of US Bourbon

Update Required To play the media you will need to either update your browser to a recent version or update your Flash plugin.
By Ashley Thompson
16 June, 2018


A trade dispute is growing between the United States and trading partners worldwide. One product that may feel the effects of the dispute is American bourbon whiskey.

The alcoholic drink will soon face a tariff put in place by several countries as a response to U.S. tariffs on steel and aluminum imports.

Paul Hletko launched Few Spirits 10 years ago. Today, the brand's bourbon and other products are in demand here in the United States and overseas. It can be found in 35 countries and many American states. It is the number-one craft spirit in the United Kingdom.

But the real prize for Hletko is China, a country where U.S. spirit exports have gone up greatly in recent years.

That growth, however, could be under threat.

China's proposed tariffs on bourbon, Hletko says, are 25 percent. That would make his and other American bourbon products "unnecessarily more expensive."

The Distilled Spirits Council says U.S. exports have risen from $575 million in 1997 to $1.64 billion in 2017. But imposing new tariffs this year could affect those numbers.

Phil Flynn is a market expert with PRICE Futures Group. He says the decision by other countries to impose a tariff on bourbon is no mistake. It is, he says, "a symbol of America."

Flynn says the tariff effect on bourbon sales overseas, especially in China, will not be as great as some may fear.

"It's not like they are banning sales of these things," he explains.

"It's just going to be a little bit more expensive. Generally speaking, if you have a good quality product, and it comes from overseas, you are probably going to pay a little more." 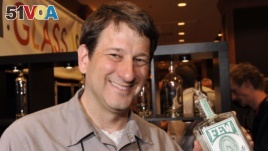 But Hletko says the tariff would greatly cut into his company's yearly sales to China. He estimates that their current $150,000 in yearly sales to the country could be reduced to $5,000 to $10,000.

American jobs could also be cut. Hletko told VOA, "Making the grain, moving the grain, doing the boxes....everybody is benefiting from U.S. exports to China and I, for one, would like to see that continue to grow."

His product also faces tariffs from the European Union and Mexico. What is now a possible loss of hundreds of thousands of dollars for Few Spirits this year could turn into millions of dollars of lost future profit if overseas consumers turn away from American bourbon, he said.

"We're simply pawns in a political game, which is unfortunate," he added.

A game that Hletko says has no real winners in the end.

Kane Farabaugh reported this story for VOA News. Ashley Thompson adapted it for Learning English. Hai Do was the editor.

pawn – n. someone that can be used to carry out the will of another individual