Update Required To play the media you will need to either update your browser to a recent version or update your Flash plugin.
By Dan Novak
11 February 2022


This Sunday, 31.5 million Americans plan to bet on the American football championship game, the Super Bowl, a trade group says.

The gambling industry's national trade group, the American Gaming Association, or AGA, released a report Tuesday. It estimated that over $7.6 billion will be bet on the Super Bowl.

In addition, the number of people playing a game of chance tied to the event increased by 35 percent from last year. Those gamblers are expected to bet 78 percent more money than in 2021. Both of those numbers would be the highest ever. 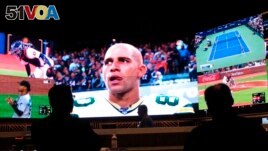 Gamblers include people making bets with friends or co-workers. They also include bets with legal and illegal sportsbooks. Sportsbooks are places where people can place bets on sporting events.

Business advice company Morning Consult said that Americans bet $52.7 billion on professional sports in 2021. That was twice the amount from 2020.

"Americans have never been more interested in legal sports wagering," said Bill Miller in a statement. He is the AGA's president. He said the growth of legal gambling across the country protects fans "but also puts illegal operators on notice that their time is limited."

Since last year's game, 45 million more people will be able to bet on the Super Bowl. Over the past year, 10 additional states have legalized sports betting. There are now 30 states in the U.S., and Washington D.C., which permit legal gambling.

Most states have laws barring some kinds of gambling and a few states still ban all gambling.

The AGA predicted that 18.2 million American adults will place traditional sports bets online, or at legal or illegal sportsbooks. Another 18.5 million Americans plan to bet with people they know. That number is up 23 percent.

The AGA found that 55 percent of sports gamblers plan to bet on the Rams and 45 percent plan to back the Bengals. However, the Associated Press reports that legal sportsbooks say more bets and money are being placed on Cincinnati so far.

"Moneyline" betting is a bet placed on one team to win which does not depend on the score. So far, 76 percent of bets predict that Cincinnati will win the game.

The Super Bowl is also one of the most dangerous times of year for people with gambling problems.

Recovering gambling addict Harry Levant is an official with the group Stop Predatory Gambling. He said the advertising around sports betting is like the tobacco industry's efforts to get people to smoke. The industry spends a reported $1.2 billion a year on marketing.

"One out of two people struggling with a gambling problem contemplates suicide, and one out of five will attempt suicide," he said. "I am one of those one out of five."

Levant said the quick rise of in-game betting feeds into a gambler's desire for more and faster ways to bet.

"No longer is gambling limited to who's going to win the game," he said. "Now gambling is on every play. Keep them gambling, keep chasing action."

Morning Consult found this year that 18 percent of American adults bet on sports at least once a month.

gamble — v. to play a game (based on chance) in which you can win or lose money or possessions

addict –n. a person who is not able to stop doing something like gambling or taking drugs

contemplate — v. to think about doing something; to consider something