Update Required To play the media you will need to either update your browser to a recent version or update your Flash plugin.
By VOA
29 June, 2014

Mainstream Republicans claimed a victory recently in their political battle with activists from the conservative Tea Party movement. Thad Cochran represents the southern state of Mississippi in the U.S. Senate. He is considered a traditional -- or "establishment" -- Republican. Mr. Cochran has served in the Senate for six six-year terms. But he had been targeted for defeat this year by Tea Party activists.

Last week, Senator Cochran defeated his opponent for the Republican nomination, but the vote was very close. In an earlier primary election, Mr. Cochran received fewer votes than his Tea Party-supported opponent -- state legislator Chris McDaniel. But neither candidate received at least 50 percent of the votes. This forced the two men into a second, or run-off, election.

Mr. McDaniel lost the runoff election. But he received money and other help from national Tea Party organizations. They have been fighting establishment Republicans for control of the party. 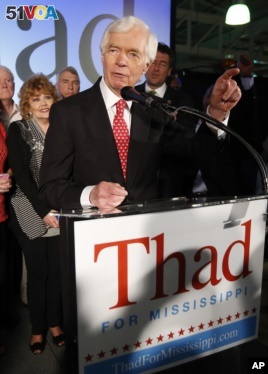 VOA National Correspondent Jim Malone has been reporting on the Tea Party movement for the past few years. We asked him to tell us what the group wants.

"Their main goal is to reduce the size of government, but, politically, they want to push Republicans away from the idea of negotiating or compromising with Democrats -- especially with President Obama. They find him sort of an opponent in terms of the size of government and in the direction the country is headed, so over the past several years we have seen a number of primary battles within the Republican Party where Tea Party challengers have taken on established Republican figures. They've had some success, they've had some setbacks. The race in Mississippi -- this latest example -- was a setback for the Tea Party, but the Tea Party will live on and this battle for the heart and soul of the Republican Party will continue indefinitely."

Jim Malone says the Tea Party movement gained strength because of the policies of President Obama. But he says the group's members oppose government spending and tax increases -- whether proposed by Republicans or Democrats.

"The rise of the Tea Party was, in part, not just against Barack Obama but against the policies of, say, George W. Bush, who was also a heavy spender -- some of it military spending. And this sort of divide in the Republican Party that we see on display in these primary elections is very much alive because the Tea Party is committed to reducing the size of government. They also want a different approach to American politics -- they do not like the compromises that we've seen in the past between Democrats and Republicans to keep the government moving. And the great example of that in recent times was last October's government shutdown -- which was led by Tea Party supporters in the Congress."

The battle between mainstream Republicans and Tea Party supporters will continue in the 2016 congressional elections. Experts believe Republicans will keep control of the House of Representatives and may take control of the Senate away from Democrats.

Tea Party supporters will be working to make the House more conservative. They also want Republicans in the Senate to support more-conservative policies. The two sides will also fight over who will be the Republican presidential candidate in 2016. Already, each side has its favorites.