Update Required To play the media you will need to either update your browser to a recent version or update your Flash plugin.
By Joe De Capua and Steve Baragona
06 October, 2013

Hello, and welcome to As It Is from VOA Learning English.

Today we have news about world health and world hunger.

Food prices have been increasing. But, surprisingly, the number of people suffering from hunger has decreased around the world.

We'll have that story in a moment, but first we tell about a new international report that notes progress in the fight against malaria and HIV-AIDS. Regrettably, another report also notes a sharp increase in the number of deaths in traffic accidents in recent years.

"This is a reflection of many, many, many more vehicles on the road -- great increases in vehicle ownership -- and very inadequate investments in the infrastructure related to road traffic safety." 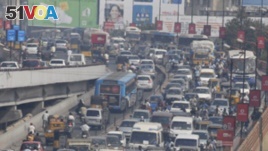 Traffic Growth in Emerging Economies Drives Deadly Accidents
Progress in Fight Against Malaria and HIV-AIDS
Recent reports from the World Bank describe the health challenges facing six major parts of the world. These include many diseases -- and also road accidents.

The bank says the reports will help policymakers develop health programs based on evidence after the Millennium Development Goals -- or MDGs -- end in 2015. The goals were developed in 2000 at a conference held by the United Nations Development Program.

The 189 countries taking part in the conference chose eight goals. The goals include reducing extreme poverty and hunger, gaining worldwide early education and equality of the sexes.

The World Bank was joined in the release of the reports by the Institutes for Health Metrics and Evaluation. Timothy Evans is the World Bank's director of Health, Nutrition and Population.

He says different parts of the world have different health challenges. So, a single health plan for everyone would not be effective.

Good progress has been made in the fight against malaria. That progress comes mainly from the use of insecticide-treated bed nets and indoor use of insecticides. For HIV-AIDS, the greater availability of drugs called anti-retrovirals has saved many lives. Yet one of the World Bank reports says malaria and HIV-AIDS are still major health problems. Road accidents are also a top killer in southern Africa -- and in most of the areas studied.

"What we're seeing is a dramatic surge in mortality and injury from road traffic accidents. And, this is a reflection of many, many, many more vehicles on the road -- great increases in vehicle ownership -- and very inadequate investments in the infrastructure related to road traffic safety."

The World Bank official says the road accident death rates in Africa are 100 times greater than those in the United States.

In the Middle East and North Africa, called the MENA area for short, health worries differ from those in sub-Saharan Africa.

Much of North Africa and the Middle East suffer violence and conflict. Mr. Evans says war and unrest directly affect the health of populations in those countries -- Syria, Libya, and Egypt, for example.

"Health does well in conditions of security. Health is really threatened in conditions of insecurity and it relates to some of the terrible violence that you see, which is often associated with situations where the normal rule of law has been lost and there's armed violence and other sorts of problems. The uncertainty often leads to mass movements of people across borders into territories where they're not necessarily welcome."

In addition, violence and conflict cause many professional people to leave troubled areas. This causes so-called "brain drain" -- loss of people with needed skills. 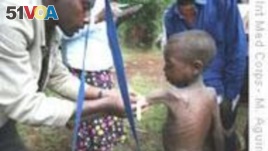 A woman makes a transaction at a remittance office in Nacaome, Honduras.
And that's As It Is for today.

Today's program was written from reports by Joe De Capua and Steve Baragona.