Update Required To play the media you will need to either update your browser to a recent version or update your Flash plugin.
By VOA
10 July, 2014

Today on the show we tell you about some unusual training for some exceptional animals: service dogs. They are are needed everywhere so there are classes to teach them about all kinds of environments.

Air travel makes some people very nervous. The crowds, the noise and flying itself can cause unease. But there are classes people can take to help them defeat the fear of flying. And, now Caty Weaver tells us about similar training for service dogs that suffer the same problem.

Service dogs almost never leave the side of the people they care for. You will see them working on buses, trains and other public transport systems. But the busy environment found at an airport can trouble even the best trained working dog.

People with disabilities depend on their dogs. They want the animals to safely guide them through security areas. They also need to the dogs to remain calmly on duty on the airplane, even when the flying is not smooth. This takes special training. The Air Hollywood K9 Flight School is one place where such help can be found.

The school has a piece of equipment that provides the sights, sounds and even the feel of an airplane in flight. It is called a flight simulator. The simulator was built for filming airplane scenes in movies. 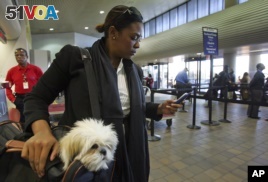 Milsa Grant of New York holds her dog Lulu Madonna, as she waits to check-in at LaGuardia Airport in New York. (File photo)

Sandy Alexander lives in Newport Beach, California. He has a disability that requires his two-year-old dog, Doc, to be always at his side. Mr. Alexander took the dog to the flight school to get him ready for plane trips. He says Doc did not like the bumpy part of the flight simulation.

"When that started he was pretty agitated and looked up at me and wasn't sure what was going on, and I think we are going to be prepared the next time it happens."

Dog trainer Mary Segall is with Canine Companions for Independence. It provides dogs for people with disabilities. Ms. Segall says successful training is based on a simple rule: preparation.

"Dogs need to be exposed gradually and repetitively to stimulation, to the environment, to loud noises, to sounds and other dogs so that when this experience happens to them on a daily basis, they're able to act in a way that they're used to acting and that they don't get excitable."

Stacy Huckeba's nine-month-old dog, Striker, is still in training to be a guide dog.

Dog owners who attended the training at Air Hollywood K9 Flight School say they now feel much more at ease about future flights. Their dogs also seem ready for takeoff.

Thanks Caty. And thanks to you all for joining us. I'm June Simms. Come back again next week for another American Mosaic from VOA Learning English.