Update Required To play the media you will need to either update your browser to a recent version or update your Flash plugin.
By Jill Robbins
24 June, 2015


The first year of college is usually a time to learn and have fun. Many young people enjoy the freedom of living away from home for the first time. For young women in the United States, however, it is a time when they are at high risk of experiencing a sex crime.

The U.S. Justice Department reports that American women age 18 to 24 had the highest rate of sexual assault. The study also found that university students were less likely to report such crimes than non-students. Among college women, nine out of ten knew the person who sexually assaulted them.

How Colleges Deal with Sexual Assault in Canada

In Canada, three universities recently ran a program to train female students to avoid sexual assault while in college. The two-year program was available at universities in Calgary, Alberta, and Windsor and Guelph in Ontario, Canada. 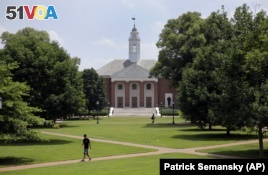 The program involved women in their first year at the schools. The students spent 12 hours learning how to judge risks, deal with emotions, and use self-defense.

The program taught students to be especially on guard at parties and other high-risk campus social events. The training taught students to attend such events together. If separated, they should check on each other periodically. They should also take extra care in their use of alcohol. At least half of the sexual assaults among college women involve drinking.

About 450 students received the training. A group of about the same size received only written information and a brief meeting with the trainers. The group that received the 12 hours of training saw an almost 50 percent drop in risk of rape.

Study investigators said there were limitations in their research. They noted that the study was designed for women. They wrote that effective interventions that target men's behavior are also needed.

In the U.S., Harvard, Rutgers and several other universities have also developed "bystander training." This means students offer help if they see someone in danger of being assaulted. The training helps students, both men and women, decide when it is safe to personally intervene and when to call the police.

Last year, President Barack Obama ordered the establishment of a task force on sexual violence at universities. The investigative group's report advised universities to take several measures. They include methods for researching the sex crime "climate" of the university and improving systems for reporting crimes as well as prevention programs.

The White House task force said one in five women experiences sexual assault in her college years. It has started a web site called Not Alone to give schools and students information on how to react to and prevent sexual assault.

President Obama spoke about the issue of campus sexual assault in one of his weekly broadcasts in January.

"Perhaps most important, we need to keep saying to anyone out there who has ever been assaulted: you are not alone. You will never be alone. We have your back. I've got your back."

Jill Robbins wrote this story for Learning English. Caty Weaver was the editor.

assault - n. the crime of trying or threatening to hurt someone physically; a violent physical attack

campus – n. the area and buildings around a university, college, school, or company

bystander - n. a person who is near, but not taking part in, what is happening

task force - n. a group of people who deal with a specific problem

Now it's your turn. How do young people in your country learn to prevent sexual assault? Is training given to both males and females? What do you think will help to reduce violence against women? Post your answers in the comments section.